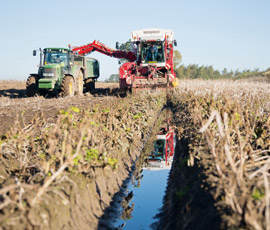 The continuing wet weather is fuelling doubts that there will be much more wheat drilling progress this side of the new year.

AICC agronomist Paul Sweeney asks whether “the shutters have squelched down on autumn sowings.

“Most growers are still holding out the hope of sowing some wheat in January or February – at least to use up the stocks of rubbish quality seed that are left. ”

He estimates that about half of winter cereals in Cheshire have been sown and no more than 20% in Lancashire and even that might be an exaggeration.

In the west, AICC agronomist Bryce Rham puts it nearer 70-80% with a variation of anything between 40-100% on any one farm. “The lowest areas drilled are typically the proper heavy stuff.”

He is not overly confident of getting any more spraying done this side of the new year either.

Mr Sweeney is not just concerned about the slow drilling progress, but also the poor quality of crops that have been established.

However, in the south, Agrovista agronomist Tim Bullock urges growers not to be too hasty in writing off crops yet. “Many are far better when you walk across them, than they look from the gateway or headland. At the end of winter 20-30 plants, managed well, can yield as well or better than a lot of thick crops.”

One glimmer of hope is that grassweed levels are a lot lower than expected, because of the delayed drilling.

“Oilseed rape crops have often looked like a carpet of grassweeds, but on some untreated wheat it is nearly impossible to find blackgrass,” says Mr Bullock.

Marion Self of Prime Agriculture says that conditions for applying propyzamide (Kerb Flo) and carbetamide (Crawler) are ideal. “These actives work best when soils are cool and moist, allowing the actives to be held in the top few centimetres of soil where weeds are germinating.”

It offers an opportunity for a top up of phoma control as necessary, she says.

Read our more from our Crop Watch agronomists on their blog.