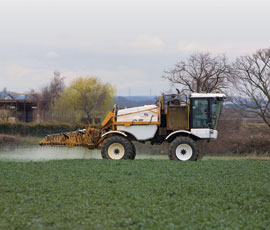 In the North, AICC agronomist Patrick Stephenson said that November “has been like the Bill Murray film Groundhog Day with every day being a repeat of the last one, dull, dry and still.” With such a mild and prolonged autumn, crops look really well.

“Yellow rust can now be found in Oakley and is fighting for leaf space with mildew. No spraying is planned for theses crops this autumn, but T0 will have to be timed well in the spring.”

Winter barley has developed very rapidly and had disturbing levels of mildew. Despite trying to ignore this, some crops had been sprayed. “My reluctance to spray is based on memories of my ADAS days when autumn disease treatments often gave a negative response. However, when mildew is on the newly emerging leaf, I feel treatment is justified,” said Mr Stephenson.


However, Will Foss of UAP has treated some wheat crops. Barley tends to respond to an autumn fungicide in such circumstances more than wheat, but there has been some mildewicide applied to struggling wheats, especially on lighter and chalkier soils.”

Colder weather would not only help the mildew situation, but also create better conditions for oilseed rape herbicides. “We are now waiting for suitable conditions to apply bifenox where needed.”

“Although propyzamide/carbetamide has been going onto some rape crops, we are only just approaching ideal conditions for them to work well. In most cases there will be no contact element in the tank, so that we can spray onto wet leaves and run off the large canopies onto the soil.”

Procam’s Nick Brown was also seeing huge canopies on oilseed rape crops. “Soil temperatures have now fallen enough to start applying Kerb (propyzamide) or Crawler (carbetamide), but getting a residual herbicide down to the soil surface will be a problem given the large canopy and we may have to wait until the frosts.”

Mr Stephenson added spring canopy management of these [very forward crop] was going to be a challenge if the winter stayed open.

But it was not just rape, Mr Brown highlighted that winter beans drilled in late October were now well up and looked too healthy and large for this time of year. “Thankfully most have been drilled at modest seed rates.”

Neil Potts of Matford Arable said that the mild conditions had been a great help for late drilled crops in his area (Devon). “With a late maize harvest, there has been a significant acreage of wheat planted later than usual this year.”


See more from our agronomists on the Crop Watch blog