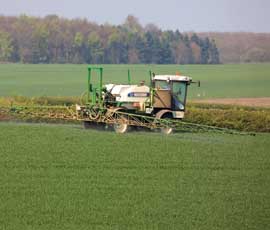 Getting the Atlantis timing application right to kill blackgrass in wheat was critical this year after dry conditions compromised the performance of pre-emergence residual herbicides, say our Crop Watch agronomists.

Crops drilled around the end of September or early October went into dry conditions and although some blackgrass has emerged, applications would need careful timing to avoid missing later-emerging weeds.

“Let’s hope the autumn remains open and we don’t get pushed into spring applications,” he said.

UAP agronomist Will Foss, based in Cambridgeshire, said a lack of rainfall was continuing to cause problems, especially for later-drilled and second wheats.

Dry seed-beds had resulted in variable performance from residual herbicides, he said. And on some farms, sulfonylurea (SU) grassweed herbicide treatments had already been made.

“In some cases, a non-SU ‘holding’ treatment is being used to increase control of emerging grass weeds with a view to tidying up in the spring with SU chemistry.”

However, where blackgrass needed treating it was still too early for propyzamide as soils were too warm and dry, he added.

Soil temperatures were falling and the opportunity to apply residual graminicides had arrived, he said.

“Heavy soils with grassweed burdens are the priority and, although not ideal, this will often be tank-mixed with a fungicide,” said Mr Stephenson.

However, broad-leaf weed problems in oilseed rape were much more difficult to deal with, as options available were limited. Bifenox would be applied where suitable.

However, given the warm conditions and the high numbers of aphids trapped, he warned growers: “Don’t compromise the barley yellow dwarf virus (BYDV) spray timing to coincide with herbicide timings.”

Mr Foss said rape crops were also growing rapidly in Cambridgeshire, although there was some variability.

“Some later-drilled crops are thin due to poor germination in dry seed-beds, but most have a sufficient plant population,” he said.

“Slugs are at very low levels. Most crops have received a fungicide to control phoma.”

Second and continuous maize crops had been severely affected by maize eyespot this year, he said.

John Sarup of Spud Agronomy (Yorkshire) reported that most potato crops had now been harvested. Some huge yields had been reported, but quality was variable. Thoughts were already turning to next year and field selection.