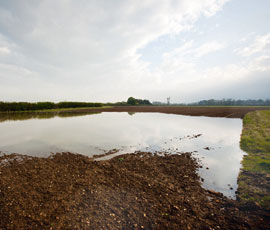 Concerns are growing as cereal drilling progress is proving slow, with many struggling to get on to the land with saturated soil conditions.

But as both AICC agronomist Patrick Stephenson and Iain Richards of Agrii point out, there is no need to panic just yet as reasonable yields can still be achieved with November-drilled crops.

“Just when you think it is safe to step into the field, another 25mm comes down,” says Mr Stephenson.

“Power harrow combination units are being sought at farm sales, but even these are failing to move in many areas, and broadcasting with a fertiliser spreader is the order of the day followed by a range of implements to cover the seed.”

However, Mr Richards urges growers in his region [Hampshire, Wiltshire and Oxfordshire] to stick with the drill. “Growers would have more to lose by rushing in and making establishment harder for crops than keeping calm and doing all we can to help them.”

He points out that in his area, growers only begin to see significant winter wheat yield penalties when sowing moves into November. “We also know we can get decent performances from sowings right up to Christmas.”

Another headache is the highly variable oilseed rape crops, as highlighted by Brian Ross of Frontier. “Oilseed rape is anything between three to five leaves in early drilled situations and cotyledon to one true leaf in the later time slots.

“There are, however, quite a few that are at three to five leaves and cotyledon. This is causing some headaches over herbicide timings, especially as volunteers need removing at the same time as broad-leaved weeds.”

Blackgrass in early rapes is now at the tillering stage with a lot of one to two leaved plants in other crops. “In resistance areas, I am going to try the earlier carbetamide timing, which claims to slow down blackgrass growth and ultimately help boost the efficacy of the follow up propyzamide treatment.”

Weed control in cereals that have been drilled is just as problematic, as AICC agronomist Stephen Harrison points out. “Plans for pre-emergence herbicides have been sent into disarray as many seed-beds were not rolled and are very open, situations where efficacy is compromised and crop damage may occur.

For Mr Stephenson, winter barley remains the priority as good post-emergence weed control options are very limited. “And if the variety is not chlortoluron tolerant then the cupboard is nearly bare.”

The wet weather was being enjoyed by slugs, which were voraciously devouring pellets to the point where nothing is left for the next wave of hatchlings, says Mr Harrison. “We are fast running out of legal doses of metaldehyde to stop them.

“I fear for the future of metaldehyde. It is a vicious paradox that ideal conditions for slugs are also ideal for metaldehyde to move into water.”