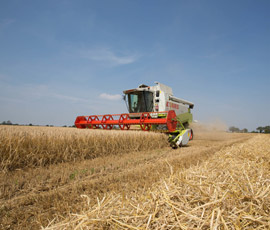 This year’s barley harvest is under way, but concerns are rising that the longest heatwave in more than seven years could be damaging UK wheat yields as crops miss out on the grain-filling period.

Strutt and Parker agronomist Ryan Hudson says the biggest concern will be wheat crops on the lighter land where the moisture has simply dried up.

“A lot of crops on the light, gravelly soils have burnt up and lost a lot of their colour in the past few weeks. Some crops have only got grain half formed and with the exceptionally hot weather, we won’t get the full grain fill, so we may see a slight dip in yield.”

Grain filling is driven by day degrees and Mr Hudson points out the faster crops accumulate the day degrees, the shorter the grain-fill period will be.

“Where we have got temperatures of 29-30C, the day degrees are accumulating much quicker, shortening the grain fill period.”

Growers on heavier land are looking in better shape, with slightly more moisture in the ground, while those who drilled early or have slightly later maturing varieties are enjoying the “perfect” conditions, says Mr Hudson.

“Varieties such as Invicta and KWS Santiago are looking very good, particularly in ground that is able to retain a bit more moisture.”

“A lot of crops on the light, gravelly soils have burnt up and lost a lot of their colour in the past few weeks. Some crops have only got grain half formed and with the exceptionally hot weather, we won’t get the full grain fill, so we may see a slight dip in yield.”
Ryan Hudson, Strutt and Parker

Mr Hudson says growers should be optimistic about the coming harvest particularly following the season growers have just experienced.

“There is obviously a lot of drought stress about, but on the whole they don’t look too bad.

“Along with the wheat, I would say spring rape is being most affected by the heat. The big determinate for spring rape yield is always the rainfall at this time of year, because it just doesn’t root as well and so gets drought stressed. In addition, the heatwave is coinciding with flowering as it tries to set pod.

The hot weather certainly seems to have accelerated the winter barley harvest with more and more combines being spotted in fields across the UK and in Ireland.

“We have cut one field of winter barley (Cassia) on light land which came in at 12.2% moisture and yielded 8.7 t/ha which isn’t great, but not a disaster either,” he explains.

Meanwhile further south Teagasc advisor Ciaran Collins, says most crops are about seven to 10 days away, but there are some growers harvesting in both Cork and Tipperary with reports of 10.1t/ha of Cassia.

Meanwhile harvest across the UK is increasing. Following one of the first reports in Tewkesbury, Gloucestershire, combines have also been out in in Cornwall and Dorset. There are also reports of winter barley being harvest in Suffolk.

It’s expected more combines are likely to come out over the weekend as the 2013 harvest gets well under way.

Keep up with all the harvest news on our Harvest Highlights page. You can also upload your own photos and let us know how your harvest progress is going.