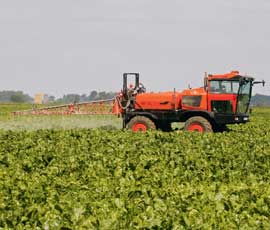 The most extensive sugar beet herbicide trials undertaken by the BBRO kicked off this year, and early indications show that all options available to growers can provide good weed control in the right conditions.

Set up this year by Rothamsted Research Brooms Barn, it is the first time that so many products and combinations have been compared for efficacy side by side.

“The trials are being conducted here in Suffolk at Brooms Barn, but also at sites in Lincolnshire and on Fen land further south, which will give us results for various soil types and weed spectrums,” says Pam Chambers, Knowledge Transfer manager at Rothamsted Research Brooms Barn.

The products compared in the trial include formulated products from Bayer CropScience, Dupont, United Phosphorus and Makhteshim-Agan, but also the FAR programme and mixes devised by agronomists, using straight actives.

“Weed control has been better than expected this year. Despite weeds being very large, they have been soft and easy to kill, which is a big contrast from last season,” says Ms Chambers.

“The only problem we have had this year is the cold and wet conditions,” she explains. “Where a large number of actives went on early and at robust rates, there was some significant effect on crop vigour.

“However, despite the crop being knocked back, a few weeks later the plots had recovered and there were no visible differences between them,” says Ms Chambers.

The trials will be taken through to yield where any detrimental effect on early vigour of the crop will be seen.

“Where the pre-formulated products have been used, it is very difficult to find a weed, so despite the loss of vigour I don’t think there will be a negative impact on final yield,” she adds.

Traditional sequences such as the FAR programme, and those devised by agronomists, have also fared well, with few weeds visible in the plots. “We have to consider the passes through the crop with these methods though,” says Ms Chambers.

“There is more time spent measuring out different products and filling the sprayer, and we will be taking this into consideration, so we will have some good results on the economics of that when considering weed control strategies in sugar beet,” she adds.