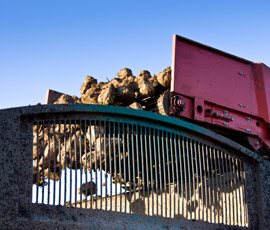 Sugar beet growers must be allowed to review their seed orders once scientists unearth the cause of problems with this year’s crop, the NFU has said.

It follows the discovery of sugar beet with malformed, twisted roots and stunted growth – fuelling fears that yields will suffer this autumn.

NFU Sugar chairman William Martin said it was clear there was a problem – although it was unclear how many crops were affected.

Growers might want to change their seed order for next year’s sugar beet if and when scientists uncovered the cause of this year’s problems, suggested Mr Martin.

Depending on those findings, NFU Sugar might also look at whether it was right that all the seed for UK sugar beet should be processed in the same place.

“In the past, I think it is fair to say that the NFU has consistently been reassured that actually the seed we get in the UK is the best that is available in Europe,” said Mr Martin.

“But if there is justifiable concern about something that has gone on – and we don’t know that yet – there is no reason why we cannot investigate whether to continue to have all our seed processed in the same place is or is not the right answer for us.”

“So we are looking at those questions, but until we know what has happened, we cannot comment any further on that.”

The erratic establishment of sugar beet crops is the subject of an ongoing investigation by the British Beet Research Organisation – jointly funded by British Sugar and the NFU.

It hopes to have answers by the end of the summer – by which time growers would normally have placed seed orders for next year’s crop.

British Sugar agriculture director Colm McKay said it had already been decided that growers would be allowed to review their seed order and make any changes once the findings were known.

The BBRO had been asked to independently assess the issue and results of their assessment would be made publicly available, said Mr McKay.

“The NFU/British Sugar seed group will review the BBRO findings and follow any recommendations made before processing of the seed commences,” he added.

“As outlined in the 2014 contract letter, growers will have the opportunity to review and make any change to their seed order they feel appropriate once the BBRO results are available.”

“We will continue to work closely with the NFU, the BBRO and all seed breeders to ensure that the seed supplied to our growers is of the highest quality available.”