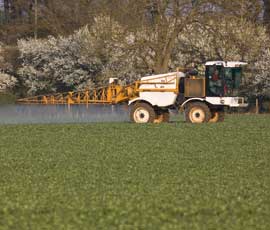 Time is running out for growers deciding which oilseed rape crops to invest in and which to rip up and replace with a spring crop or leave fallow.

Agrii agronomist Andrew Richards says farmers will need to work on a field-by-field basis in order to make the right decision, based largely on weed pressure and plant population.

However, he urges growers to do everything they can before giving up on the crop. The current price of £385/t should provide enough incentive to invest in and persevere with it where possible.

“Many marginal crops have actually got some good roots, giving them a fighting chance. The same applies to those with pigeon damage – a good root and they’ll be able to recover,” he says.

Grassweeds, however, will be a big problem, leaving farmers with a number of dilemmas, explains Mr Richards.

“Weed control is a priority, but you need to be able to get on the ground. If you’ve got bad blackgrass, cranesbill or cleavers, they are going to have as much of an effect on your decision as the size and number of plants,” he says


Many OSR crops did not receive the planned autumn herbicides, leaving limited spring options. Added to this, growers will need to be careful with their applications on backward crops with the risk of damage (scorch) to the smaller plants.

“The amount of options available to growers and their limited efficacy on certain weeds mean growers will have the added risk of investing in a crop that may fail anyway. It can get into a vicious self-defeating cycle.”

The resilience of OSR is also something growers can draw comfort from. Hybrid varieties at 10 plants/sq m and slower developing conventional varieties at 15-20 plants/sq m would be enough to provide a respectable crop come harvest.

A good, even population will be important across the field, however, weed problems could prove the decider.

Chickweed control will be difficult, with very few products able to control it fully, which is why early broad-leaved weed control is so critical, says Mr Richards.

“Crawler (carbetamide) will have a small effect on chickweed, but that’s really hitting the blackgrass and this can only be used until the end of February.

“What we’ve got be careful of is the crop being strong enough at about five or six leaves to take an application of Crawler and avoid any damage,” he says.

Cranesbill and cleavers are two other weeds growers need to monitor, with Mr Richards suggesting Galera (clopyralid + picloram) or Fox (bifenox) as possibilities for targeting the weeds.

These products are also quite harsh on the crop, so they’re only advisable on stronger-looking crops.

“If you’re confident with your crop, you could go with Crawler and then follow this up with Galera 10 days later,” he says.

When waiting for the crop to improve, farmers may find if the soil dries, the efficacy of Crawler on blackgrass will dwindle, as it is solely reliant on root uptake.

Mr Richards admits it will be a tough balancing act. Growers may have to compromise, forcing Crawler on, with the risk of making ruts.

Nitrogen and sulphur will be another priority, although putting too much nitrogen on backward crops would be pointless, according to Mr Richards.

“They’re not going to be able to get hold of it, so with limited roots we’re going to look at putting on some Nutriphite or some foliar phosphite to try and get some foliar feed into the leaves. This will, hopefully, stimulate some activity and allow the crop to make the most of any nitrogen applied.”

With many crops sat in wet soil, a phosphate deficiency is also expected, even in forward crops. Symptoms include purpling of the leaves. A foliar phosphate application may be able to counter this.

The high rainfall is also expected to result in low levels of boron and sulphur, so Mr Richards advises a sulphur/nitrogen mix in the first application.

Watch our videos for practical tips on measuring the GAI and how to manage crops this spring.