Fresh potato and vegetable production was failing to pay its way, so in 2004 Martin Hamilton decided to add value by turning his crop into a healthy, convenience food.

Seven years later he is turning his entire crop into mashed vegetable products which he is supplying directly to major supermarkets.

Potato is the most important crop grown at Ballyrainey House, Comber, Co Down, N Ireland as it is the base for most products. Mr Hamilton devotes 130ha of the 325ha farm to the crop and Maris Piper is his variety of choice. “It gives consistent quality, even tuber size and high dry matter, which is essential for the our products. It also gives us the flavour and taste we need, it cooks well and produces a very even mash.”

King Edward and British Queens were also grown last year, but the latter is being dropped due to poor yield. “Quality is our first consideration, but we need volume to keep the factory supplied.”

Potato planting was planned for mid-February, but a sustained wet spell means the tractors are at a standstill. “We do get high enough temperatures to start planting in February, but it’s just too wet at the moment. It looks like we won’t get going until early March now.”

The area suffers from wet weather and drilling opportunities are limited so he runs enough equipment to have two planting teams running in tandem.

Drilling should be completed by the end of May, but the second week of June is his final cut off. Blight is the main agronomic problem and at the peak of blight season he sprays every seven days. 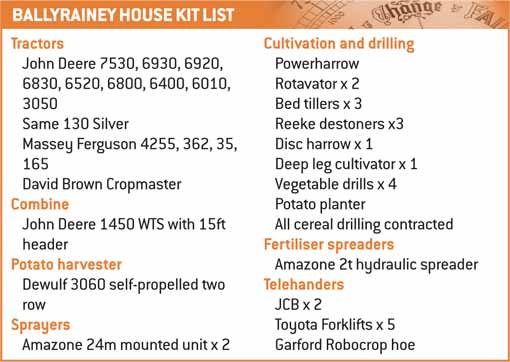 Clean ground is essential for vegetable growing so Mr Hamilton leaves at least a four year break between potato crops. Typically he will follow potatoes with a vegetable crop such as carrots, then spring barley and a cabbage crop before returning to potatoes. “Sometimes we squeeze in another barley crop after the cabbage if we think the land still needs a rest.”

Some of the 205ha of rented ground is rotated to keep fresh, clean land coming in, he adds.

A Dewulf 3060 self-propelled harvester takes care of all potato lifting as well as some of the carrot and parsnip crops. It can lift 4ha potatoes in a day and can carry 7t on board before needing to unload.

The potato crop needs to last until July when tubers will be available from the new crop so they are kept in a 3000t cold store with temperature probes.

Once vegetable crops have been lifted the ground is left bare until the spring drilling campaign starts. Some crops are overwintered and he still has small areas of carrot, parsnip, green cabbage, leek and swede to lift.

Early swede crops are lifted mechanically, but the overwintered portion will have to be picked by hand, says farm manager Gary Adams. “We’ve got 400t to lift by hand and put in the cold store. These will supply the factory until July.”

The crop has been damaged by the harsh winter and 4-5% has been killed by frost, he says. “They are black and easy to spot so we just leave them in the field.”

Savoy cabbage has been the biggest winter casualty, but has been hammered by pigeons, not frost, says Mr Hamilton. “They were like swarms of locusts. The sky was grey with them and there was no way we could control them.”

The pigeon plague has written off a significant proportion of the crop and he is having to import cabbage to keep the factory running.

Swede is the second most important root crop on the farm and Mr Hamilton plans to establish 40ha this spring. 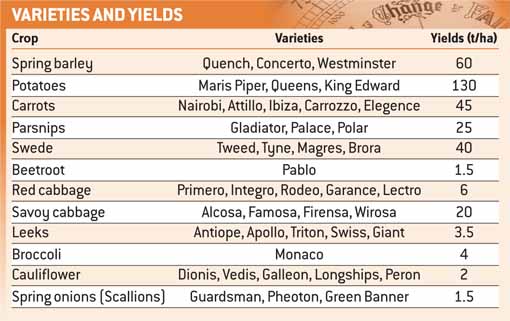 With all vegetable crops he chooses varieties for flavour rather than appearance. “This means we have moved back to some of the older varieties.”

Mr Adams looks after the day-to-day running of the farm and is constantly walking fields to check crop condition. “I have an agronomist and a series of advisers to call on if there are any problems, but I walk them all myself.”

He is working to reduce artificial inputs and has invested in a Garford Robocrop robotic hoe, which cuts chemical inputs by 25%. He is also experimenting with a garlic and willow sap spray to control cabbage root fly and slugs, and is using Omex’s seaweed Bio-stimulant product.

Winter cereals are avoided because autumn trafficing damages the soil structure, but spring barley is grown as a break crop, says Mr Hamilton.

This spring he is putting in 60ha which will be drilled by a contractor. He combines the crop using his own 15ft cut John Deere 1450WTS, but all grain is sold directly off the combine. He hopes to install a drier and grain store on a separate plot at some point to improve margins.

The farm is a LEAF member and won FWAG’s Northern Ireland Silver Lapwing award in 2010. This year he plans to enter the farm into the national competition.

Martin and Tracy Hamilton started the Mash Direct business in 2004 after 20 years struggling to make a profit out of their fresh vegetable crops.

They started by making Champ, an Irish mashed potato recipe containing scallions (spring onions), but quickly branched out into other mashed vegetable products.

Mash Direct now processes 400t of vegetables and potatoes every week into more than 18 different mash products, says Mr Hamilton. “We distribute these throughout the UK, Ireland and beyond, and our products are available in most major supermarkets.”

All vegetables are grown, steam cooked and packaged on the farm, he adds. “We use vegetable varieties grown for taste rather than appearance and we have developed a plant on the farm to recreate a traditional cooking style.”

A unique masher and three steam cookers were designed specifically for the plant to allow such large quantities to be processed in the traditional way, he says. He also has a custom built root washer and a large-scale peeling machine. From harvest the crop can be processed and in the supermarket within 24 hours, he says.

The farm can’t meet all of the factory demands, so some is bought in from local growers and he imports 20% of the material from abroad. Mr Hamilton is considering expanding production by contracting other local growers and is already in discussion with some.

His son, Lance, has recently joined the business and is helping to branch into new markets and adding new products to the line.

Martin Hamilton farms 325ha at Ballyrainey House near Comber Co Down with his wife Tracy and son Lance. The family owns 120ha and 205ha is rented.

Soils are a mixture of light and medium loams and all ground is ploughed and cultivated each year.

The ground stretches as far as 20 miles from the base at Ballyrainey House, which is also home to his diversification business Mash Direct.

Potatoes and root vegetables such as parsnips, carrots and swede are the main crops and spring barley is grown as a break crop.