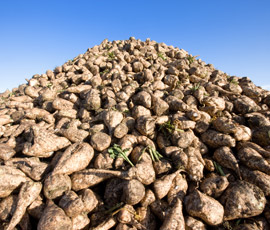 Growers are being urged to check sugar beet following the discovery of crops with malformed, twisted roots and stunted growth.

In some fields, up to 70% of sugar beet are said to be affected – fuelling fears that yields will be down and dirt tare up when harvest starts next month. Some growers expect crops will yield nearer 50t/ha than the usual 72t/ha – a loss of £600/ha.

Norfolk farmer John Orford told Farmers Weekly his crop had never been right since it was planted this spring. The beet had been drilled in good soil in good conditions, he said. “From day one, it has looked like it has suffered from some sort of poison.”

Problems are reported across a number of different beet varieties, involving growers in all four beet factory areas across eastern England. It follows the erratic establishment and partial failure of crops earlier this year, which itself is the subject of an ongoing investigation.

Lincolnshire grower and NFU Sugar board member Nick Wells said: “Initially, it appeared there were germination problems. Subsequently it would also appear that the roots on certain beet plants haven’t developed properly. We’re still not absolutely clear about the reason for that.”

The British Beet Research Organisation suggested the problem could have been caused by a “less-than-ideal soil structure” in many fields following the wet autumn and winter. Other factors could include nematodes and feeding damage from pests during the early crop growth, it said.

“Affected plants are not as efficient at drawing water and nutrients from soil and are consequently less able to yield well,” said a BBRO bulletin. Growers should examine crops and “dig some soil pits where fangy symptoms exist” to try to establish the cause, the bulletin added.

But there was no evidence of any compaction in one Suffolk field where Farmers Weekly took that advice and dug up 10 adjacent beet in a single row. Seven of the beet were malformed, with some plants exhibiting what appeared to be secondary or tertiary tap roots.

Talks between NFU Sugar and British Sugar are due to resume in a bid to resolve the impasse over the 2014 sugar beet price. Growers representing more than 5m tonnes of beet have now pledged their support to NFU Sugar, which has rejected the British Sugar offer of £30.67/t.

Variety ‘not to blame’ for sugar beet problems