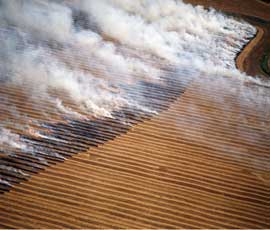 Farm minister David Heath says he is willing to consider evidence in favour of lifting a ban on stubble burning.

He made the comments as agronomists and farmers at Cereals 2013 in Lincolnshire discussed the implications of a return to the controversial practice.

But those against argue that it is environmentally unfriendly, resulting in black smoke that would be a PR disaster for farmers.

Stubble burning was effectively banned in 1993 following environmental concerns. But rising resistance to chemicals have made blackgrass an increasing problem.

Mr Dixon initiated the trials after growers belonging to the #ClubHectare Twitter group voiced concern over the decreasing armoury of chemicals against the problem weed.

“We are not talking about a wholesale return to stubble burning, but limited and controlled burning in exceptional circumstances,” he said.

The Association of Independent Crop Consultants is also conducting trials.

It has established four plots, two each of winter wheat and winter oilseed rape. Resistant blackgrass was spread on all of the plots to simulate an in-field situation.

Post-emergence herbicide treatments will have been applied on both the wheat and rape plots to mirror typical on-farm practice.

Following this, cereal straw will be burned on one of the wheat and one of the rape crops to demonstrate the effects of burning.

AICC chief executive Sarah Cowlrick said it was right to review the arguments for and against stubble burning.

“It is time to revisit the research of the environmental impact of burning when weighed up against the possible reduction in pesticide use,” she said.