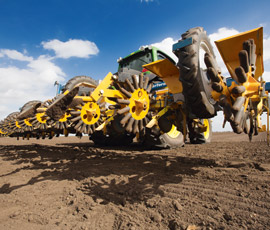 Farm leaders are to push for a higher sugar beet price after rejected British Sugar’s offer of £30.67/t for the 2014 crop.

Some 361 people, representing 550 sugar beet growers, attended an NFU meeting at the East of England Showground, Peterborough, on Tuesday (18 June). The NFU Sugar board will now re-enter price talks with British Sugar for the 2014/15 beet crop.

NFU sugar chairman William Martin said the turnout showed the strength of feeling among growers that the British Sugar price offer was much too low. “We are sick of being at the bottom of the European price table,” he told the meeting.

Mr Martin said he had an acceptable price in mind, but declined to reveal what it was. “British Sugar have come up with a base price – it is not up to us to put a ceiling on it,” he said.

Urging growers to stick together, Mr Martin said farmers should refrain from engaging in price negotiations with British Sugar on an individual basis. Growers at the meeting agreed to forward their contract details and pledges to NFU Sugar to underline their unified commitment.

Mr Martin said: “For many growers, the British Sugar price falls short of what they have been asking us for and what is necessary to address concerns of having beet in the rotation. It is good to see that feeling reflected in the room today.

“The sheer number of you here shows the strength of feeling in the sector, and how important it is for us to move forward on this together and with your backing. We have a clear aim – to ensure our colleagues in Europe are not paid more than us for the same product.”

Phase two of the negotiations comes after British Sugar unveiled its initial offer of £30.67/t at this month’s Cereals event. Mr Martin said: “This demonstration of strength sends a clear signal to them that we are united and we will be expecting a much better price if they want us to agree.”

Negotiations could take months – but Mr Martin said growers were prepared to wait as long as it took for NFU Sugar to secure a fairer price, reflecting the value of sugar beet. If British Sugar failed to budge, farmers would be growing oilseed rape instead.

British Sugar said it had already offered £3/t more in recognition of the increasingly long sugar beet season, factory reliability and profitability of other crops. Had it not done so, the agreed mechanism price for 2014 would have been £27.67/t.

The £30.67/t amount was the proposed base price for contracted beet, before late delivery bonuses/payments had been applied, said British Sugar. Beet delivered later in the season would receive a higher price – as much as £34.11/t by the end of February.