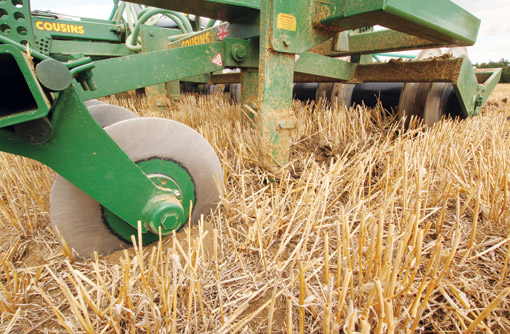 Inconsistent oilseed rape establishment is every grower’s nemesis, but one Suffolk grower is hoping to beat it with the new Cousins Oil Drill.

The biggest culprit for early oilseed rape failure is loss of moisture from the seed-bed after cultivation, followed by a prolonged dry spell to finish off the thirsty seedlings.

Geert Willemsen, who grows 325ha of combinable crops at Trucketts Farm, near Boxted, Suffolk, has experienced just that with his current establishment method.

He has been using a Simba Solo followed by a Culti-Press to prepare the seed-bed, before drilling his 81ha of predominantly hybrid oilseed rape with an 8m Horsch C08 drill.

“In 2010 and 2011 we had plenty of showers to get the crop going, but last autumn we had a seven-week dry spell, followed by an unfavourable season.

“It resulted in us getting a 2.5t/ha crop, which is way below the 4-4.5t/ha we would usually achieve,” explains Mr Willemsen.

He identifies the loss of moisture in the key period between drilling, as well as the falling temperatures and sustained wet weathe, as the key factor in disappointing yields.

He is looking for a way to give his oilseed rape crop the best possible start across his predominantly heavy soils, to ensure the crop makes it through until the spring with maximum yield potential.

“We are looking for something that will give us consistency in establishment, and the Cousins Oil Drill is also a one-pass solution, so will save us time and fuel,” adds Mr Willemsen.

The farm has established a field of PR46W21 with the Oil Drill this year to assess how it performs against its current set up.

The crop is following winter barley, which had all the straw baled, so Mr Willemsen says it has gone into ideal conditions.

“Initial impressions are that it has made a great job and it’s certainly not as crude as many sub-soiler establishment methods,” he says.

Hutchinson’s technical manager Dick Neale has been instrumental in developing the machine with Cousins and he believes it will provide the answer to Mr Willemsen’s problem.

The 6m strip-till cultivator drill has an opening disc followed by the Micro-Wing tine working at 75-175mm to create a tilth before seed and micro-granular fertiliser are dropped in the strip before being closed and consolidated by a Razor Ring “zonal” press.

Seed and fertiliser are delivered via a Techneat Duo seeder unit and slug pellets are dropped on the surface of the cultivated strip from a Terracast applicator behind the rear zonal Ring press.

“The key to consistent rape establishment is good seed-to-soil contact and conserving moisture. The Oil Drill is designed to consistently achieve that, gently opening the soil and instantly pressing it once the seed and fertiliser have been placed,” says Mr Neale.

Using the Micro-Wing tines at 600mm results in only 20% of the soil surface being disturbed, which not only prevents the seed-bed drying out, but also results in fewer weed seeds being encouraged to germinate.

Mr Neale says this is particularly important where tough-to-control blackgrass is an issue, but also with broadleaved weeds such as charlock and cranesbill, which are becoming an increasing problem for oilseed rape growers.

“There is no avoiding some weeds germinating in the rows, but with almost all the seed covered by 15mm of consolidated soil, you can commit to a robust pre-emergence herbicide spray,” says Mr Neale.

The use of Primary P – a combination of phosphate, nitrogen, sulphur, magnesium and zinc – in the row gives the crop a further boost at establishment.

Mr Neale says 10kg/ha of the micro-granular fertiliser is a useful addition and gives growers the confidence to keep seed rates low due to the improved establishment it offers.

“Often seed rates are too high, allowing for losses from pigeons or slugs, but the Oil Drill can provide a better and more even and vigourous stand to confidently drop those rates,” explains Mr Neale.

A seed rate of 40-45 seeds/sq m is recommended, aiming for an optimum plant population of 20 established plants a linear metre down the row.

Overall slug pellet rates can also be reduced from 7kg/ha to 2kg/ha as they are applied only on to the cultivated strips, with the upper rate still being maintained within the row itself.

“There are environmental benefits as you are not only using less, but the cost saving you make can be used to invest in high-quality ferric phosphate pellets and avoid metaldehyde for the intitial application,” says Mr Neale.

Watching the establishment of Geert Willemsen’s trial with interest alongside Crops was BASFs agronomy manager Ruth Stanley, who thinks because the soil is not disturbed between the legs there will be fewer germinating weeds, providing a big advantage for weed control.

She also points out that it provides an efficient one-pass solution that will give the crop the best start to compete with any weeds that germinate at establishment.

“It’s not just about a bit of kit though and growers should try to ensure that everything is working together, both with cultural and chemical controls,” says Miss Stanley.

With low blackgrass dormancy and moist seed-bed conditions providing ideal conditions for weed germination, pre-emergence herbicides will be under pressure this year.

Miss Stanley points out that everything will come up at the same time, so maximising the efficacy of early herbicides will be key to getting the crop away with minimal weed competition.

“Seed-bed quality is a key component in that, and a metazachlor-based pre-emergence combined with quinmerac and/or dimethenamid-P will offer the best control,” she says.

BASF will be teaming up with Hutchinsons and Cousins at this year’s Tillage-Live Event at Welton, Lincolnshire, to offer the latest advice on maximising weed control this autumn. The Cousins Oil Drill will also be in action in large-scale plots.