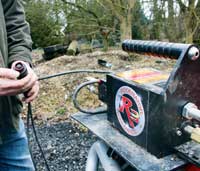 There are few jobs more satisfying than blowing things up. Combine that with effective pest control and it’s no surprise that the Rodenator burrow-collapser has become a hit with UK farmers since it was launched in 2007. In fact, more than 1200 have been sold.

After seeing coverage of the Rodenator from the World Ag Expo in America six years ago, Robin Purser got in touch with the company and secured the rights to sell the Rodenator in the UK and Europe.

“It took quite some time in negotiations with DEFRA to agree the use of the Rodenator in the UK. It was a long and hard slog for the first four years and we invested a lot of money.”