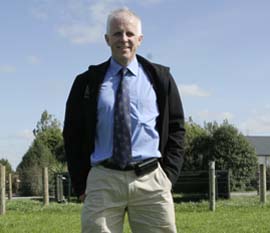 Applying a product to prevent nitrogen leaching from urine patches from pasture is helping some New Zealand dairy farmers both increase grass production and reduce their environmental impact.

Increasing productivity while meeting the raised environmental concerns raised by the general public and overseas buyers of the country’s dairy products was a key challenge for producers, Keith Cameron, a soil scientist at Lincoln University in New Zealand, explained on a dairy field day visit during the International Farm Management Association conference.

Researchers had installed around 60 lysimeters – effectively an encased column of soil – in pasture at the university’s dairy research farm to monitor nitrate leaching losses.

“What we found was it was not fertiliser applications that caused problems, but cows urinating. Urine can contain the equivalent of 800-1000kg/ha of nitrogen, so you have a lot of localised hotspots from where nitrogen can leach.”

That nitrogen was converted first into ammonium and then into nitrate, which was vulnerable to leaching, as it did not stick to soil and organic matter, unlike ammonium, he explained.

“So the idea was to develop a means of having less nitrate in the soil, which is where nitrification inhibitors come in – they slow down the production of nitrate.

“They are applied as fine spray onto the soil to treat the bacteria that convert ammonium into nitrate.”

Two applications are needed in New Zealand systems, the first in May after grazing, the second in mid-July provided there has been 10mm of rain or irrigation prior to the next grazing and pasture cover is less than 3000kg/ha dry matter. “Effectively it future proofs the paddocks for urine deposits.”

In the trials at the research farm, Prof Cameron had found Eco-N, the commercial product, could reduce nitrate leaching by 60-65%. “It is providing dairy farms with a tool to meet the challenge of environmental concerns.”

Nitrate is also converted to nitrous oxide, which has 300 times the greenhouse gas potential of carbon dioxide, and released to the atmosphere. “When we applied the inhibitor, nitrous oxide emissions were reduced by 75%.”

Despite the excellent results, however, Prof Cameron said currently there wasn’t any great driver for New Zealand farmers to use an environmental tool. “There is no recompense for reducing greenhouse gases currently, even if it is for the public good.”

So the trials have also analysed the product’s effect on grass production. The theory is that the product helps to hold the nitrogen which is leached or emitted, in the root zone so the plant can use it, boosting the N supply to pasture for grass growth.

“Eco-N costs NZ$170/ha for two sprays, including product and application costs, so you need around 5-6% increases in grass growth to get your money back. In trials at Lincoln University we’ve seen increases of 15-20%.

“In this case, it is an environmental technology that has a benefit for farmers.”

Around 20% of producers in Canterbury had tried Eco-N since its commercialisation in 2004, but nationally the figure was less than 5%, Prof Cameron admitted.

Part of the reason could be that the yield responses seen in South Island trials had not been replicated on North Island. “We’ve still got some work to do.”

Increases grass production by up to 20%