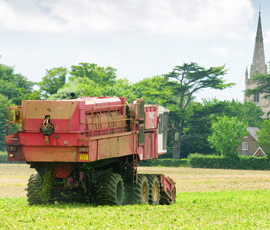 The vining pea harvest is under way two weeks earlier than usual, but prospects for the 2011 crop aren’t exciting, visitors to the PGRO’s vining pea trials day were told.

Both drought and frost have taken their toll on this year’s vining pea crop, warned PGRO’s technical director Anthony Biddle, with yields in England predicted to be around 20% down.

“Moisture has been limiting,” he said. “But the frosts at the beginning of May also played their part. On many crops, they took out the growing point, causing blind shoots to form.”

Not only has yield been affected, maturity has also suffered, he warned. “It makes harvesting timing very difficult and has caused total crop loss in some instances.”

The situation is the same across much of Europe, although Scottish crops are faring better and should yield well, he reported.

“Of the other pulses, combining peas are looking better than expected, given the dry conditions. Unfortunately spring beans are suffering, while winter beans are a mixed bag. Combining short crops with very low pods will be tricky.”

Vining pea growers are harvesting 10-14 days ahead of their normal date, he confirmed. “It’s been a bit of a scramble for the factories to be up and running in time. There are obvious implications for transport and the price received if they have to be hauled further, especially for those growers who produce the speedy pea.”

The first broad bean variety trial for 10 years is in the ground at PGRO, continued Dr Biddle. “There’s renewed interest in the crop, but varietal requirements for the fresh and frozen sectors are different.

“The aim is to produce a new list by the end of the trial.”

Whole pods are harvested for the fresh market, he explained. “That means that the number of seeds per pod and the weight of seed per pod is important, as is continuity of harvest.”

For frozen broad beans, just one of two varieties have dominated in recent years. “We’re looking at some new ones this year, as there has been breeding progress.”

The number of vining pea varieties entering trials has dropped considerably, so growers should expect some lean years ahead, warned Steven Belcher.

While the main trial features 29 pre-selected varieties, just 12 varieties are in the preliminary trial, with eight making it through to the screening stage.

For more on the on-going PGRO trials including work on plant populations, carbon footprints, sclerotinia control and soil phosphate, visit the pea trials section of the FWi website.

The last work done on vining pea populations was in the 1960s, revealed PGRO technical officer Becky Ward, which showed that the optimum population was 118 plants/sq m.

“That work also confirmed the very rapid yield increase that came from increasing the population, without any corresponding increase in disease.”

The current plant population trial is using three varieties sown at five different seed rates, ranging from 70-140 plants/sq m, she added. “We haven’t had any meaningful results yet, but an important consideration for growers is the seed cost.”

“The hope is that emissions from legume crops are low, so we are looking at levels where residues are incorporated and where they are removed,” explained Mrs Ward.

Although any emissions are assumed to be related to nitrogen inputs, it seems that they may be linked to surplus nitrogen supply over crop uptake, she added.

“This spring, we had delayed uptake of soil mineral N due to the dry weather. But we are testing nitrogen inputs and have had some good yield responses.”

The short flowering period of vining peas and dwarf beans means that there’s only one spray timing to control sclerotinia, summarised Jim Scrimshaw.

Very little, localised, infection last year means that fungicide applications had no effect, he revealed. “But the model did predict spray dates at flowering, in line with recommended spray timings.”

Improved guidance on target soil phosphate indices for vining peas is the subject of a four-year study being run in conjunction with NIAB TAG.

Nathan Morris of NIAB TAG said that the current recommendation of maintaining the soil index at two may need to be revised. “It’s an expense that growers might be able to do away with.”

As well as new guidelines, Mr Morris’s work is also concerned with how soil type influences crop response to phosphate.