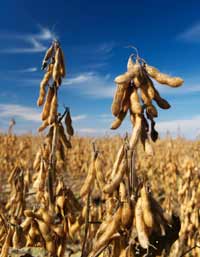 Speciality oilseed growing for healthier food oils has taken off in the USA over the past three seasons. But there have been challenges, too. John Middleton reports

The area of land sown to Vistive low linolenic soyabeans in the USA has increased sharply to meet escalating food industry demand.

In 2005, about 100,000 acres of the speciality crop were grown on contract for two processors in a single state to supply essentially the same market as the Vistive high oleic, low linolenic (HOLL) oilseed rape grown in the UK.

By last season this had grown to more than 1m acres in 14 states, serving 21 processor locations. And 31 seed companies offered the trait.

Driving this rapid expansion is the realisation that trans-fats, produced from the partial hydrogenation of unsaturated vegetable oils to make them stable for food processing, carry greater health risks than the saturated fats they replace, says Monsanto‘s David Stark.

He told UK seed industry specialists on a recent study tour of the American Midwest that food manufacturers across North America had increased their commitment to reduce or eliminate trans-fats now that the amount in all foods had to be shown on the label and that many states had proposed banning them altogether.

“Pioneering the move to healthier oils have been industry leaders like Kellogg’s and Kentucky Fried Chicken,” he said. More than 100 food companies were now using Vistive low linolenic oil in their products.

“With less than 3% of the oil fraction as the relatively unstable linolenic acid compared to 8% in standard soyabeans, the oil is naturally stable at high temperatures. This allows processors to continue using readily available soya oil without the need for hydrogenation,” he explained.

The next generation of Vistive product in the breeding pipeline are low linolenic, mid-oleic soyabeans. The fat profile of these varieties is much closer to the UK’s Vistive HOLL oilseed rape, and yields are said to be much improved. The new soyabeans are set to become available commercially after the turn of the decade.

Monsanto is also developing Omega 3-enhanced soyabeans, which provide a source of Omega 3 with similar nutritional benefits to oily fish. Field trials have proved successful and a range of foods made using the new oil have scored well in product tests.

However, introducing Vistive to the market has not all been plain sailing, said Mr Stark. “Overcoming the inertia in a supply chain geared to the bulk processing of a single commodity has certainly been a challenge. After all, the system was never designed for segregated storage of different bean types or separate crushing or oil storage and delivery. So a good deal of infrastructure has had to be developed, and many established mindsets changed.”

There are also a range of alternatives available. Palm oil may have a less desirable fat profile but it delivers excellent cooking stability. And standard soyabean oil can still be used and disposed of regularly, before it goes off. All this limited the premium available for Vistive from the highly cost-conscious food industry, Mr Stark noted.

“Several years experience has taught us the vital importance of working closely with influential food companies to create sufficient ‘pull’ in the market to persuade the supply chain to change. At the same time, we’ve learned that you really need yield parity with the standard crop for things to really stack up for all concerned.

“With canola as your base, you have an inherently attractive unsaturated fat starting-point in Europe,” he concluded. “And with significant higher yielding and agronomically superior second and third-generation high oleic, low linolenic varieties rapidly coming through your breeding pipeline any yield gap is fast disappearing.”

Even so, I’m sure your key challenge in making speciality oils mainstream, just like our own, is to develop the right infrastructure and mindset throughout the supply chain.”