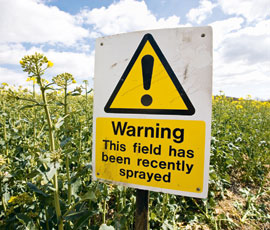 The Directive on the Sustainable Use of Pesticides will soon be adopted in the UK. Robert Harris finds out how this and other regulatory issues might affect growers.

UK arable farmers have escaped relatively lightly compared with some of their EU counterparts when it comes to the Sustainable Use Directive (SUD).

Although this rather alarming sounding piece of Brussels legislation appears to have an equally disquieting remit – to regulate the application of crop protection products by setting out legally binding practices across the EU – its effect in the UK is likely to be limited when it is introduced, probably in May or June.

UK growers already fulfil many of the directive’s demands to protect human health and the environment, thanks to the Voluntary Initiative. Over the past 11 years, this initiative has promoted responsible pesticide use through the National Register of Sprayer Operators (NRoSO) and the National Sprayer Testing Scheme (NSTS).

These schemes have stood UK growers in good stead, says NFU plant health adviser Don Pendergrast. “Broadly speaking the UK is ahead of the curve. DEFRA said as much after consulting on the SUD in 2010, stating that UK standards to protect human health and the environment were already among the highest in the EU.

“It said the VI had been instrumental and only limited addition regulation would be needed. So we don’t expect any nasty surprises when the SUD is finally implemented in the UK.”

The biggest change, which will affect several thousand farmers/sprayer operators, is the abolition of grandfather rights, says Mr Pendergrast. These allow people born before 1965 to apply pesticides without an operator’s certificate of competence.

“We expect DEFRA to remove these rights from November 2015. This is unlikely to affect big arable units, but there are plenty of sole operators working under grandfather rights and many more on farms with trained staff but who do the occasional bit of spraying,” says Mr Pendergrast.

The NFU has argued that the loss of grandfather rights should be replaced by continuing professional development (CPD) schemes like NRoSO, rather than by forced inclusion on an assessment programme.

“We think the authorities have taken notice. However, it is not clear whether they expect people to qualify for membership before the rights are removed, or whether they will accept them signing up at the time.

“Our advice is not to wait, but to sign up to NRoSO or equivalent scheme to start gathering the points.”

A requirement in the directive to promote Integrated Pest Management (IPM) has caused unnecessary concern among farmers, says Mr Pendergrast.

IPM is generally viewed as a complex system, relying on establishing and monitoring acceptable pest levels and favouring mechanical and biological control over pesticides, he says.

“However, the SUD appears to be referring more to integrated farm management – promoting the use of sustainable cultivation systems and rotations, for example, with a focus on practices and products with the lowest environmental impact.

“UK growers already do much of this through assurance schemes and the VI. This is basically good farm practice; I have been led to believe we are not in for any surprises.”

Concerns that only those people with the necessary NPTC qualifications would be allowed to buy pesticides have receded. “It’s likely that the person doing the buying will only have to prove that the farm has a qualified operator,” says Mr Pendergrast.

“This will certainly avoid the practical problems that would have occurred had the original plan been implemented.”

SUD is expected to introduce compulsory sprayer testing, with all sprayers tested by 2016. Operators will have to get their sprayers tested once between then and 2020 and every three years beyond that, says Mr Pendergrast.

“Most larger operators here get their sprayers tested annually under the NSTS. Smaller operators using equipment less frequently are more likely to be affected.”

The new 20m maximum buffer zone could help prevent products containing chlorpyrifos from being banned. The chemical is undergoing a routine re-registration review, under which the current 5m buffer required alongside watercourses is deemed too narrow to meet the EU’s revised limit in surface waters of just 0.1 parts per billion.

However, even with a 20m buffer, watercourses remain at too high a risk from drift if standard 03 flat fan nozzles at 2 bar pressure are used, says Dow AgroSciences’ ecotoxicologist Steve Norman. “According to existing UK policy, chlorpyrifos products cannot be re-approved.”

Switching to LERAP three-star-rated low-drift nozzles with a 20m buffer does keep levels within the permitted limit. The three main UK approval holders, Dow AgroSciences, Makhteshim Agan and Headland Agrochemicals, have made this combination a requirement and launched a campaign, Say No To Drift, to try to head off a ban.

The hope is that widespread uptake of the new application requirements by sprayer operators will persuade the CRD to re-register chlorpyrifos using low-drift nozzle technology with an appropriate buffer zone. If successful, this would be the first time low-drift nozzles have featured in the UK approvals process.

The CRD is keeping a close eye on the campaign’s progress, says Rob Mason, director of regulatory policy at CRD. “Assurance of a high level of compliance would be a key factor in ensuring that risk mitigation was secure.”

The CRD is also is considering ways in which risk mitigation measures such as spray drift reduction used in other member states as part of the approvals process could be recognised in the UK, he adds.

Several other key chemicals identified as causing problems in surface water by CRD and/or Environment Agency are being monitored closely, warns Mr Pendergrast.

Metaldehyde has been the subject of the well-publicised Get Pelletwise! campaign aimed at avoiding peak autumn levels that cost water companies millions of pounds to clean up.

Other chemicals include propyzamide, carbetamide and chlorotoluron. “Some of the chemicals under threat are subject to specific stewardship schemes, others are listed in the VI’s water protection advisory sheets, along with best practice guidelines,” he advises. “Everyone should visit the appropriate websites and follow the advice to help protect these valuable products.”

Variable buffer zones from 5m to 20m, introduced last year by the Chemicals Regulation Directorate, will soon appear on some product labels.

The previous maximum buffer was 5m. The move to extend this was made in response to manufacturers concerned that some products, mainly insecticides, could disappear due to tightening legislation to protect watercourses.

Mr Pendergrast believes it is potentially good news for growers, helping to protect existing chemistry and potentially giving access to new and old molecules that could not previously have been registered in the UK.

Affected, but as yet unknown, products will be assigned buffer zones on 1m increments from 5-20m on a crop-by-crop, rather than a product, basis. Information will appear on the label.

Court ruling would have wide ramifications for UK growers

Pesticides campaigner Georgina Downs has been battling for years against what she describes as DEFRA’s failure to protect rural residents from exposure to pesticides.

Although she won her case against DEFRA in the High Court in 2008, her victory was overturned in the Court of Appeal the following year.

Ms Downs’ case is based on the premise that the current risk assessment process required to get any product registered is flawed, primarily because that process does not cover the long-term exposure of residents living near sprayed fields.

“Under EU law the absence of any risk assessment for residents means pesticides should never have been approved for use for spraying in the locality of homes, schools, children’s playgrounds and public areas,” says Ms Downs.

The legal case remains live and is now before the European Court of Human Rights. If successful, it could have severe ramifications for growers, including no-spray zones in residential areas and compulsory notification of
residents before spraying.

Ms Downs remains hopeful of eventual victory. “When the Judge in the High Court carefully considered my evidence, he ruled that the UK Government was in breach of both European law and of Human Rights laws. If the European Court of Human Rights also carefully considers my evidence then hopefully it will also rule that the policy in the UK is in breach of human rights.”

“Although there will be no legal requirement to warn neighbours before spraying, DEFRA wants farmers to develop good relations with neighbours.

“This initiative helps farmers do that. The general approach is to get farmers to indicate key spraying times and to explain why crops need protecting. It is good practice and has been quite well adopted, but we want to encourage as many as possible to join to stay ahead of potential legislation.”

• For more information on pesticides and best practice, visit the Syngenta Sprays and Sprayers arena at this year’s Cereals event on 13-14 June 2012. To order tickets in advance and avoid the queues on the day go to the Cereals event website