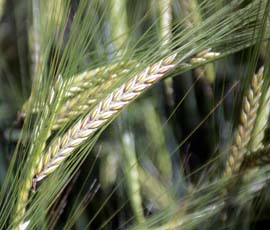 Harvest is still at least a week away at Court Lodge, Aldington, Kent, where Martin Boulden is patiently waiting for crops to ripen.

“We don’t have any winter barley – we redrilled it with spring barley instead,” he said. “That’s still green so will be two to three weeks away.”

Winter wheat was a fortnight away, but a fair bit of the first wheat had been redrilled with linseed. “We don’t like looking at bare fields,” he added.

“The wheat really tells the story of the winter; bare patches, slug patches and blackgrass patches.”

Mr Boulden ripped up about a quarter of his oilseed rape in March / April, to redrill it with spring beans, and the remainder was a mixture of good, bad and indifferent.

“We’re spraying it off today, along with one block of peas, which look very well,” he said.

Although one neighbour had combined some winter barley, the rest of Romney Marsh was relatively untouched. “You’d think it was the end of June, not the middle of August – everything’s just so green.”

With such a late harvest, he was particularly concerned about getting oilseed rape drilled this autumn. “We’re sitting around with nothing to do – but we could do with this time later on. Getting the rape sown is going to be a bit of a job.”

“It’s very variable; there are good bits and bad bits,” he said. “As long as the storms keep away we’ll get into it properly tomorrow.”