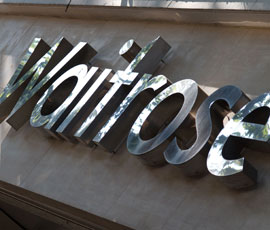 Waitrose is banning suppliers from using three neonicotinoid pesticides linked to a decline in bee populations.

Farmers supplying the fruit, vegetables and flowers to the retailer have been asked to avoid the use of formulations imidacloprid, clothianidin and thiamethoxam by the end of next year at the latest.

Under Waitrose’s Seven Point Plan for Pollinators, which begins immediately, the three formulations will no longer be used on crops attractive to bees, butterflies and other pollinators.

The supermarket said it was introducing the restriction on the use of neonicotinoids in its supply chain as a “precautionary measure”, until scientists can demonstrate they are safe.

Waitrose aimed to be a restorative retailer, putting back more than it takes from the environment, said its managing director, Mark Price.

“We believe our decision on the three formulations of neonicotinoids is appropriate until conclusive evidence is put forward about the effects of these three chemicals,” he added.

The approach will also be rolled out progressively to commodity crops such as oilseed rape on the 1,620ha Waitrose Farm at Leckford in Hampshire – and as soon as practicable to other areas of the arable sector that supply Waitrose.

In addition, Waitrose will fund a three-year research project in association with the University of Exeter into the effects of multiple pesticide use on pollinators.

The work will look at the impact of combinations of neonicotinoids and other pesticides on pollinators and the results will be used to develop alternative methods of pest control.

Last week, a cross-party committee of MPs, the Environment Audit Committee (EAC), urged DEFRA to suspend the use of pesticides containing imidacloprid, clothianidin and thiamethoxam.

This follows a call by the European Commission for an EU-wide two-year ban on these products, which represent “serious risks” to bee health, according to scientists from the European Food Safety Authority (EFSA).

However agrichemical companies Syngenta and Bayer CropScience, which manufacture the products, insist data collected from field trials shows they are safe and any ban would be disproportionate.

Luke Gibbs, spokesman for Syngenta UK, said the company welcomed Waitrose’s pollinator plan, which was closely aligned to its own efforts to protect bees over the past 10 years.


But he added: “We find it extraordinary that a respected retailer is prepared to ignore hard evidence from the field, most recently presented by the UK government and others, that these pesticides, which are essential to protecting our food, pose a low risk to bees.


“Thiamethoxam in particular has been used safely on millions of hectares of crops for over a decade without damaging bee health – and this has been validated by many regulatory authorities around the world. So how much proof does Waitrose want?”


However, Friends of the Earth (FoE) said it was “fantastic news” that Waitrose was the latest major retailer to take action on pesticides linked to bee decline.


FoE head of campaigns Andrew Pendleton added: “There is mounting concern about the damaging impact these chemicals have on bees and other pollinators – we urge other stores to follow suit.


“Ministers can’t ignore the mounting concern from scientists, businesses and the public – they must back EU proposals to restrict these insecticides later this month.”


The Soil Association said it “strongly supported” Waitrose’s move and hoped it would persuade DEFRA secretary Owen Paterson to “act to protect pollinators”.


EU agriculture ministers are due to vote again on 29 April on the commission’s proposal to restrict the use of neonicotinoids for a two-year period. The proposal was blocked last month after a vote failed to gain enough support for a ban.

Farm industry fights back over neonicotinoid ‘threat to bees’