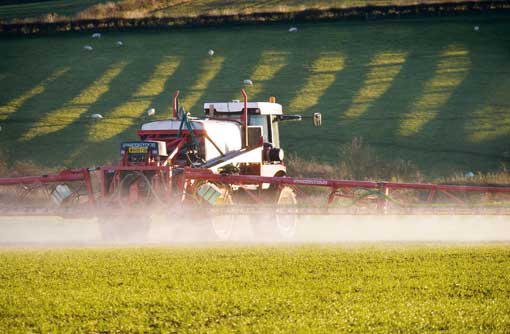 Increasing resistance to sulfonylurea-based herbicides may have been amplified last season, with experts warning growers they need to put more onus on cultural controls this coming autumn.

Sulfonylureas have been the basis for some of the most efficient weedkillers for many years, however, last season some growers putting them on in sub-optimal conditions, increasing the risk of resistance.

They are still the most efficient type of chemistry in the marketplace, according to experts; when put on in the right conditions they performed relatively well. However, continued bad weather restricted growers in their timings.

“We try to put these products [SUs] on in the autumn, when the weeds are small and actively growing and before they shut down for the winter. This year, however, the conditions haven’t allowed us to do that,” said Hutchinsons technical development director David Ellerton at Cereals 2013.

Very little went on at the optimal time in the autumn. This resulted in a large number of blackgrass populations being bigger than normal putting extra pressure on products such as Atlantis (iodosulfuron + mesosulfuron) and Unite (flupyrsulfuron + pyroxsulam).

This was then compounded by the fact there were long spells of cold weather in the spring, resulting in blackgrass and other weeds not actively growing or taking up the product, explained Dr Ellerton.

Blackgrass has been one of the major worries for growers, with resistance on the rise.

“If you spray the product and the blackgrass comes through it, you have automatically selected for resistance, so it really is the worst case scenario – exposing the weeds to the chemical and it shrugging it off,” he explained.

“This year we have had cold weather for weeks on end, so deciding how long to wait has been a challenge. The other thing that happened was that it was warm during the day and cold at night.”

The fluctuation in temperatures will have affected the efficacy of the products, said Dr Ellerton, while affecting the crop at the same time.

Dow AgroSciences’ cereal herbicide specialist Stuart Jackson agreed there was a possible risk of increased resistance next season due to the poor conditions this season, but admitted everything was against the chemistry.

“Grassweeds were quite big, it was still cold and soils were dry so it wasn’t great whatever you did. Under those sort of scenarios if you have got metabolic resistance in your grassweeds, something like that was probably the tipping balance to make it really show.

“If we had had better conditions in the autumn, we could have got our residuals on, allowing the SU chemistry to be more effective.

Meanwhile Stephen Moss from Rothamsted Research said that resistance is an increasing issue, but there were other factors reducing efficacy.

“It’s is a problem that will continue to worsen and where there is resistance it will tip the balance and you will see less control.

The potential of seeing greater resistance next season will mean growers will have to re-evaluate their weed control strategies, said Dr Ellerton

“This resistance potential means we are going to have to get much better control in stale seed-beds, and really focus on maximising the control we get from non-chemical methods.”

This spring has seen a lot more broad-leaved weeds come through, said Dr Ellerton, with bindweed and charlock particularly prevalent.

“Normally if you get your residual on in the autumn, you get relatively few broad-leaved weeds in the spring, but so little went on last season, we were forced to rely much more on the sulfonylureas.

The season was the main factor, but clearly a resistance and other factors will have been playing a part, according to Dr Ellerton.

“Whether it is because the weeds were too big, conditions weren’t right, you couldn’t get penetration, the weeds weren’t growing properly or whether it was resistance, there is no real way of knowing, you just know you didn’t get good control.

“I think that what last season has shown us is you need to get control early and you need to use cultural methods. You cannot just rely on chemistry anymore and we need to be wary of making the problem worse,” he explained.

Mr Jackson concluded that conditions last season had been the major factor in the lack of performance from some of the sulfonylurea-based chemistry, but reassured growers, given optimal conditions they would still be able to get a good level of control.