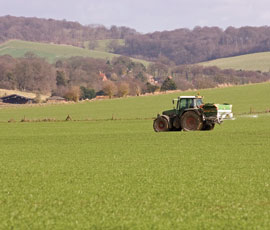 Few growing seasons can have been more unpredictable, as wet winter followed wet autumn, and a cold, late spring added to the grief. Farmers struggled to drill winter crops, and many fields succumbed to the bad conditions, forcing widespread spring re-drilling.


Demand for inputs was erratic, with seed sales going through the roof, but fertiliser and agro-chemical demand extremely subdued. Some clear lessons emerged.


With yield prospects so uncertain, farmers were understandably cautious about committing to top-up fertiliser tonnage unless they were sure of getting a return, says Andrew Merton, crop inputs manager at farming co-operative AtlasFram.

By late April sales of phosphate and potash fertiliser were about 20% below normal, although nitrogen sales were not as subdued, particularly in the East, where crops were faring better. Some growers were expected to carry over surplus ammonium nitrate into next season. In a quiet market, ammonium nitrate prices were unchanged on last year, at just over £300/t, while granular urea was about £350/t cheaper than a year ago.

The Business Area at Cereals 2012 occupies an entire avenue, often dubbed Business Alley, two-thirds of the way between Entrance One and Entrance Two.


There you will find expert advice and the latest opinions from fellow professionals within the arable sector and the wider farming industry.


Exhibitors in this area include:


Agro-chemical sales were similarly stagnant, with many farmers having missed a spray window due to the weather and growth stage of the crop, says Mr Merton.


Winter seed sales were marginally up in East Anglia, with some farmers drilling crops as late as February. But a lot of oilseed rape was ripped up and replaced, leaving spring seed supplies very tight, pushing spring barley seed into the £600s/t by late April.


The season highlighted the need to be careful not to get sucked into buying more inputs, in an attempt to improve crop yields, says Trevor Atkinson, technical director at Sentry. “We had to be realistic about yield expectations, and work backwards from there. It’s very easy to spend money chasing yields that you’re never going to achieve.”

Benchmarking helps identify where unnecessary spend can be reduced. “It’s essential to know production costs. Common areas where costs are particularly high are trace element fertilisers – they may increase yield, but if you’re spending a lot more to achieve that then your margin remains the same.”


Look at the long term too, Mr Atkinson advises. “Ensure you apply enough phosphate and potash to compensate for what you’re taking off.” Making better use of manure, slurry or sewage sludge can help cut fertiliser costs considerably. “It is the cheapest source of phosphate and potash available.” But it’s important to sample the soil and the manure, so as not to over- or under-estimate the application rate.


Precision farming can cut costs by only applying product where necessary – and can also lower fuel usage. “A lot of tractor management systems have fuel economy and power settings – rather than always operating on full power you can save a lot of fuel by opting for the economy setting,” he adds.

However, with the soil having suffered during the wet autumn, many farmers are likely to see fuel bills rise as they increase fieldwork to reduce compaction problems.


“We’re going to have to do a lot of remedial cultivation – we normally use about 80 litres/ha of diesel, but I expect that to increase to 90-100 litres. A big issue is the cleaner tier-four engines we’re using now. If you buy inferior fuel, that translates into engine problems, so you have to be careful where you buy.”


Parts costs are set to rise, as farmers need to do more sub-soiling, ploughing and power harrowing. “Our total machinery repairs are just under £50/ha – I suspect that will rise.” Sentry is starting to buy seasonal parts requirements in bulk, to cut costs and save time collecting individual items.


It is easy to fall into the trap of blanket application of agro-chemicals, so take stock and ask if yields are rising in response, he adds. “Focus on where yield potential is greatest, and if you’re not sure you’re getting the results, spray a few tramlines and leave the rest, to see what difference it makes.” Improving rotations to help reduce weed and disease pressure, rather than simply relying on chemicals, is also important.

Lessons from a tough season


Two years of poor crops means incomes are under pressure, and cashflow will be particularly tight. “Input costs are spiralling, the single payment is under pressure and at some point cereal prices will come down,” says Mr Atkinson. “Cash management is going to be critical.”


Logistical considerations mean that farmers will have to plan in purchases more carefully, especially for bulky products such as fuel and fertiliser. “Farmers have to think ahead, because the infrastructure isn’t there to deliver everything to everyone tomorrow. Easter was a huge challenge, because suddenly spring fieldwork started and everyone wanted fuel. Waiting times were up to 10 days as the infrastructure couldn’t cope.”

Farmers may be considering machinery changes to help them react to weather windows, says Strutt & Parker consultant Ryan Hudson. “With the Annual Investment Allowance increasing to £250,000, some may see this as an opportunity to invest.” However, finance may be a struggle, given the fall in incomes.


“As an individual, some farms can struggle to get the negotiating power that a larger business can get, therefore we often negotiate several machines for different farms as a whole to secure a better price.”


While it’s important to target inputs according to yield potential, farmers should beware of cutting inputs to the bone, he adds. “Yield is always king, and poor crops require similar, if not higher, levels of inputs to get a respectable yield.


“This year, disease pressure has remained high and fungicide spend is likely to increase. However, it is all about appropriate dose and correct timing. Last year, many farmers sold wheat at £130-140/t and had to spend a lot of money on fungicides to get a yield that was still disappointing. Today we can sell for £180/t and, therefore, we must be prepared to spend on inputs to maximise yield – although that must always be balanced against the crops’ realistic potential.”

Keep up to date with the latest Cereals news