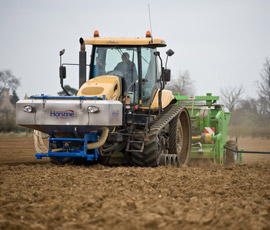 Torrential rain has slowed potato plantings to a trickle over the past two weeks, with growers setting just 74,000ha by 27 April.

Heavy storms had caused localised flooding in the South West, with ground conditions in the east also extremely wet. Where crops had been planted, the cold temperatures had slowed growth, with overnight frosts in places. “Three weeks ago plantings were going very well into excellent conditions – we were well ahead of average and slightly ahead of last year,” said James Lee, group technical manager at Greenvale AP.

In Shropshire and Staffordshire, growers had planted about 95% of their crop, while those in Somerset and Herefordshire were down at 70%. “It’s a mixed picture across the rest of the country, but we are 10-14 days behind now and it’s going to be a while yet before they can make any further progress.”