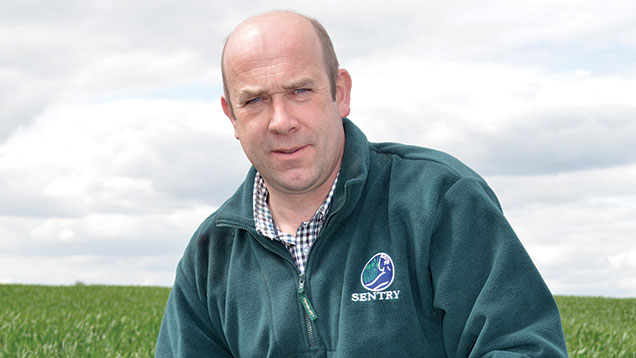 Growing feed wheat for Weetabix is earning Leicestershire grower Robert Rouston a premium, which can mean the difference between breakeven and profit.

This year he has earmarked 500t of the variety Diego to go to the breakfast cereal group for a £3/t premium over feed wheat market prices.

The predominantly medium clay land in his part of Leicestershire is well suited to wheat, with feed grain mostly being grown because of a lack of nearby flour mills.

Mr Rouston was first approached by grain merchants Gleadells and asked if he would supply Weetabix at a small premium in 2011.

“A £3 premium doesn’t sound much but with current prices at less than £110/t for feed wheat it makes all the difference and it isn’t particularly hard to meet their spec,” he tells Farmers Weekly.

Weetabix’s main requirements are a specific weight of 72.5kg/hl and a vomitoxin level, which includes mycotoxins such as fusarium, of less than a set number of parts per billion.

“Once the grain is in the shed they will take a test sample to get these numbers. We easily met the DON last year with a rating of less than 250ppb and our specific weight was 75,” says Mr Rouston.

He adds that protein and Hagburg numbers are of less importance to Weetabix but supplying farms need to be within a 50 mile radius of the company’s factory in Burton Latimer, just south of Kettering.

Mr Rouston is farm manager for a 880ha arable unit run by farming company Sentry at Blackbrook Farm, Shepshed, just five miles west of Loughborough and is about 45 miles from the plant.

“The Diego is historically what we have grown because it seems to meet the spec quite nicely and Weetabix like it. It isn’t as high yielding or as quick to grow early on but it’s clean and that is most important,” he says.

Mr Rouston also grows Santiago which he describes as a “good barn filler” but its weaker disease resistance makes it less suitable for this premium.

This year he is trying the newer variety Evolution, and says he could grow more of it the future if it yields well this harvest.

He operates a four-spray fungicide strategy for all wheats, and sees a T3 azole mix head spray to the Weetabix-bound Diego crop as essential to keep the mycotoxin count low.

Premiums aside, Mr Rouston explains that one of the big advantages of selling to Weetabix is flexibility, especially in poorer seasons.

“I book in 500t with them and it isn’t priced until we know what the quality is like in the autumn in case we do have a bad season and I’m stuck with something that I can’t sell,” he says.

He estimates that cost of fungicides for all wheat varieties up to T2 is £90/ha and he will then spend a further £8-£10/ha on a T3 azole mix spray for his Diego to hopefully guarantee the DON requirement is met.

With his input costs so close to feed wheat market values of little more than £100/t at present, Mr Rouston insists that searching for even the smallest of premiums will help growers’ pass their breakeven points.