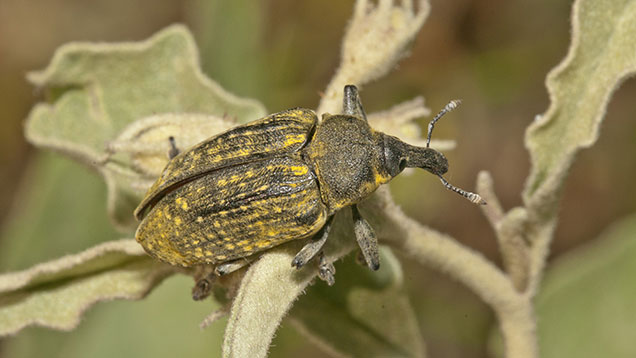 Pea and bean growers are being told to look out for signs of weevil attack in seedlings after the recent warm, dry weather saw a spike in cases.

Reports say there have been high levels of damage seen in winter bean crops in some areas of the UK, with spring pea and bean crops also under increased threat.

Growers need to act by spraying as soon as seedlings begin to suffer from characteristic leaf-notching, warns the Processors’ and Growers’ Research Organisation (PGRO).

Adult weevils will be laying eggs, which get washed into the soil.

“In the first few weeks the adult weevils will lay a lot of eggs, so the key is to act once you see the leaf-notching”
Becky Ward, PGRO

While the leaf damage they cause will tend not to cause major problems unless seedlings are heavily infested, hatched weevil larvae will feast on the root nodules.

“In the first few weeks the adult weevils will lay a lot of eggs, so the key is to act once you see the leaf-notching”, she tells Farmers Weekly.

There are several pyrethroids available and Ms Ward says consideration should be given to products used later in the season for bruchid beetle control, paying attention to maximum rates and the number of applications allowed.

“Many growers are opting to spray once with pyrethroid products such as Hallmark [lambda-cyhalothrin] for weevil and again later in the season for bruchid beetle control.”

Crop damage is most commonly seen at the flowering stage, but seedlings can also develop the stem thickening and twisting symptoms along with a reddish-brown staining.

Particularly bad cases can result in high yield losses and there is no chemical control.