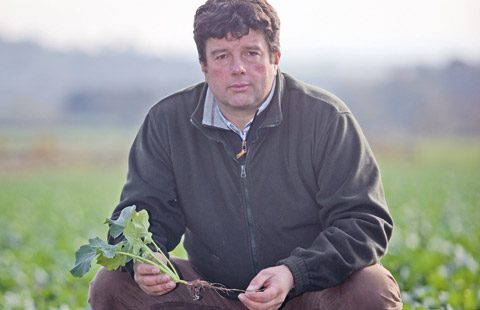 “You’re never happy are you? First it was too dry, now it’s too wet.” This is the general gist of the conversation when I go home at night.

Correction, a conversation is a two-way dialogue, so for those of you who know my wife….

I know we should be grateful that we have had plenty of rain, but land drains running full bore in May is not something I have seen for a long time. What it does mean though, is that we have acres of overwintered onions that are now going to have to be topped and cultivated in as it has been too wet to harvest them. Interesting discussions will now take place regarding payment of these bypassed crops.

Wheat flag leaf sprays are now all completed and these damp conditions should be a good test for the new SDHI fungicides. We tried a small area last year without a great deal of noticeable difference between them and our normal T2 spray. This year, the SDHIs may just come into their own and a much larger percentage of the crop has received them.

Oilseed rape flowering seems to be going on for an age and we are now contemplating our third fungicide, which will coincide with some more liquid nitrogen applied to the pods. Each year this has produced different results in terms of yield response, but we aren’t really sure if that has been down to the weather or the fertiliser.

The folks at Vaderstad excelled themselves as hosts on a recent trip to Sweden to look at their production facilities,the local farming and an inspiring wild boar shoot. The tidiness of the country really does put Britain to shame but after contributing, along with several others, to their alcohol tax revenue, it’s easy to see where the funding comes from to keep it that way.