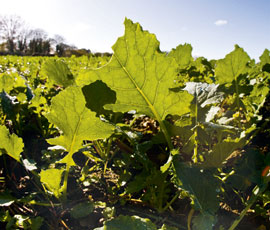 Growers may need to pay more attention to crop nutrition this season, as several factors including increased leaching caused by this year’s higher rainfall could result in lower soil reserves.

“There’s potentially a quadruple whammy with regard to boron and sulphur,” he says. But deficiencies of other key nutrients, notably potassium and manganese, but also magnesium, copper and zinc, are likely to be seen more often in 2012-13, he believes.

The unusually heavy rain in much of the country means that leaching of soluble nutrients has been greater than normal; but longer-term factors are also involved.

A Cranfield University survey found soil organic matter levels fell steadily between the 1980s and 1990s, he says. “Over 15 years they came down by about 1%. That may not seem large, but against the fact that many analyses are below 3%, it represents a major loss.”

Yara’s Jon Telfer confirms that almost a third of soils tested for organic matter by the firm’s Analytical Services from 2001 to 2011 were below the optimum level. “We tested 70,532 samples and 21,887 were below 3%,” he says.

“Organic matter is a key store of nutrients. But it’s delicate and easily destroyed by over-working the soil, and lost through erosion by water and wind.

“It regulates the supply of plant nutrients by forming chemical interactions with nutrient ions, making them more readily available to plant roots.”

Low organic levels mean land is less able to hold essential elements or supply them during the cropping year, and some agronomists are reporting figures below 1% on some farms, says Mr Bannister. “This will affect all elements but some more than others – for example, those such as boron and sulphur (as sulphate) held preferentially by the organic rather than the mineral part of the soil.”

He also fears boron and molybdenum deficiencies will be exacerbated in rotations closely cropped with oilseed rape, which has a higher demand for the elements than cereals.

Many farmers appreciate that when straw is baled and removed, potassium (K) is taken away from the soil’s reserves. But some may not realise that other nutrient elements, notably manganese, can also be lost in this way, Mr Bannister suggests.

DEFRA’s Fertiliser Manual RB209 gives figures to help counteract such K losses depending on whether straw is ploughed in or removed, he says. “When straw is ploughed in, the K goes back into the system, but when it’s removed and not replaced it’s lost, with long-term effects on soil indices.

“The same principle can apply to other elements, so we know intuitively that levels of these will be reduced. However, there are no figures that suggest farmers should be replacing these losses with in-season foliar applications.

“Manganese as a micro-element falls into the category of an uptake element mirroring the macro-element potassium in that respect. It’s taken up in some of the largest amounts of any micro-nutrient. So as more straw is removed from the system, manganese levels will theoretically reduce unless they are replenished.

“That may well be one reason why some agronomists say manganese deficiency symptoms are now being seen more often. Some as yet unpublished work comparing soil analyses from some years ago to those conducted more recently indicates that soil levels of manganese, copper and zinc have all fallen.

“Unlike sulphur and boron, magnesium exists in the soil as a positively charged ion or cation and so, logically, can attach itself to the mineral portion of the soil. However, in its hydrated form it’s less tightly bound to soil colloids than other cations and can be prone to leaching.

“The Professional Agricultural Analysis Group survey indicates that plenty of soils in the UK, especially in East Anglia, are below critical levels for magnesium. Magnesium, like other elements, will be removed from the system if straw is baled rather than being ploughed in.”

A comparison of results from Lancrop Laboratories’ broad spectrum soil analyses in August 2011 and August 2012 is revealing, adds Mr Telfer.

“Anyone who’s been worried about nutrient leaching after the excessive summer rainfalls has had their fears well and truly confirmed (see table).”

Mr Telfer believes this lower figure for boron may reflect an average pH rise of about 0.15 units over the 12 months. “Boron becomes increasingly insoluble as pH rises, and so less prone to leaching,” he explains.