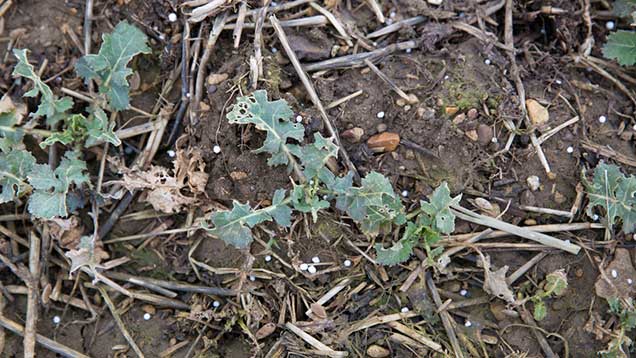 Recent rain has led to warnings of a slug onslaught, as the increased soil moisture draw slugs to the surface to feast on newly emerging oilseed rape crops.

“The same rain that has slowed harvest progress will be encouraging slugs to the surface in search of food,” says David Glen of Styloma Research.

“Should it continue, populations will increase, and with many growers yet to finish drilling their oilseed rape, the threat to crops is steadily intensifying,” he says.

“Growers will need to ensure crops are protected from the outset while conditions will necessitate the use of a quality pellet,” Dr Glen adds.

“Recent weather clearly favours slugs, and while growers may not have seen much evidence of them, rest assured they will be there in good numbers,” Dr Glen says.

While metaldehyde remains the most popular choice among growers, there are circumstances when an alternative active ingredient – the only one being ferric phosphate – may be a preferable means of control.

Until this season, growers had only one supplier of ferric phosphate pellets to buy from, but there is now a choice following the approval of a pellet manufactured by De Sangosse.

“Ironmax Pro has been several years in development and we have gone to great lengths to ensure it matches the performance offered by our leading metaldehyde pellets,” says the company’s commercial manager, Simon McMunn.

The new 3% ferric phosphate pellet is for the UK market and Mr McMunn points out that the firm will continue to produce pellets containing metaldehyde.

“We remain committed to products containing metaldehyde in the first instance. This has been the focus of our work in supporting new approvals in the EU on metaldehyde over the past 10 years.”