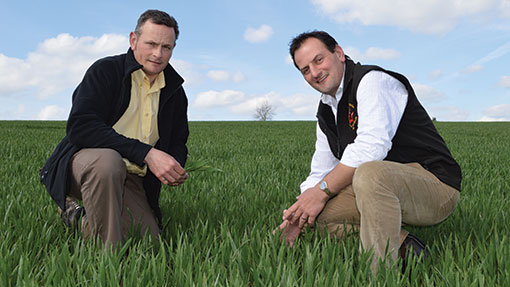 The wet weather disease septoria is one of the biggest threats to winter wheat growing in the high rainfall areas of England. David Jones travels west to find out how one grower is combating this yield-sapping disease.

Three years of on-farm trials convinced Andrew Williamson of the need for a high-performing fungicide at the flag leaf stage on his winter wheat in the wet cereal-growing region of southern Shropshire.

His main disease headache is septoria, so he was keen to test all the latest SDHI fungicides. Septoria inoculum is present every season in his cereal fields so the policy is to stop the disease climbing up the crop, especially in a wet spring.

“Septoria is our main problem disease. What we use to control septoria will sort out most other diseases such as yellow rust,” he says.

His independent agronomist Antony Wade adds that for T2 spray in the wetter west growers should assume they have disease and so there is an emphasis on curative action rather than protective.

In 2011, Mr Williamson picked the then-new SDHI/triazole product Aviator and pitched it against the farm’s historic treatment of a triazole/strob mix.

The SDHI approach showed a slight increase in yield over the triazole/strob, and although the results were variable, other trial results prompted him to continue.

The next year, in 2012, the Aviator approach showed a 0.2t/ha yield advantage over competing SDHI product Seguris, while the following year a similar yield advantage was seen over another competitor, a Treoris-triazole mix.

“We ran the trial for three years, with three comparisons and three different weather patterns, and Aviator proved the best in our situation and our cropping,” he says.

The fourth of the new generation of SDHIs products, Adexar, was used in 2012 in a high yellow rust situation and similar results were seen to Aviator.

Mr Wade adds that in his region of Shropshire and Herefordshire, Aviator is often the standard choice at the flag leaf stage on wheat for two reasons.

First, the product is very quickly rainfast when sprayed on crops, which is particularly useful in a wet climate, and second it has a high dose of the triazole partner.

Disease control is particularly key this season on Mr Williamson’s 312 ha of arable cropping at Upper Overton, five miles south west of Bridgnorth, because of the milder winter and hence high inoculum levels.

In his five-year autumn-sown rotation of oilseed rape, wheat, oats, wheat and barley, the aim is to drill winter wheat in late September, and at least by the end of the first week of October.

Seed rates are generally higher than normal, at 250-300 seeds/sq m, to make sure of good crop establishment on his heavy soils often hit by slug damage. Average yields are around 9t/ha, with the aim to push for 10t/ha.

Rusts are not usually a big problem in his wet climate, but one field of the yellow rust-susceptible variety Oakley has been plastered with the disease this spring.

Frosty weather would normally control the rust, but with only three frosts this winter the yellow rust has survived, although Oakley will not survive into next season on the farm because of its disease susceptibility.

The rust situation prompted an early T0 spray for the Oakley on 19 March, while the T0 spray on the rest of the wheat went on in the first week of April.

The five feed varieties make up all his wheat area as there is good demand for feed wheat from nearby animal feed mills in his largely mixed arable and livestock region.

A T1 spray, likely in the third week of April, is set to be a triazole/chlorothalonil mix, although a SDHI approach will be tried on some areas.

The SDHI Vertisan, plus the triazole epoxiconazole and also chlorothalonil, will be tried on some of the farm’s lighter soils to test its claimed benefits of prompting better rooting, while epoxiconazole will give good rust control on the more susceptible varieties Keilder and Santiago.

The T2 flag leaf spray has been proved to give the biggest yield response of all fungicide timings, so it is even more critical in wetter climates, with septoria spread closely linked to rainfall in April and May.

“We would definitely used a SDHI at T2,” says Mr Williamson, and due to Aviator’s rainfast qualities and its high triazole dose, it is his choice for the farm.

Rusts are not really a problem at this late stage apart from on susceptible varieties such as Oakley, so there is not the need for a highly active triazole against rust or a strob.

“We should have managed yellow rust well before the T2 stage,” says Mr Wade.

Bayer organised about 40 farmers nationwide to look at different fungicide treatment on winter wheat over the past three years, by splitting fields between two different treatments.

The group found a yield benefit by using its Aviator over a triazole/strob mix of about 0.6t/ha over the three years, worth about £100/ha even though the SDHI approach may be some £7-8/ha more expensive than the triazole/strob mix.

Bayer also found a benefit of at least 0.2t/ha by using Aviator over other SDHIs, such as Seguris.