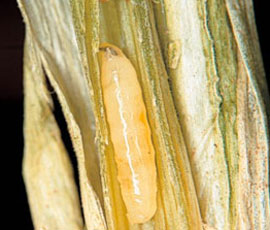 Wheat bulb fly could pose a threat to cereal growers this autumn with late-sown crops seen most at risk.

This season’s hot and dry summer should have given growers the upper hand as it left less food for the wheat bulb fly, but poorly established crops may have helped the pest, says ADAS entomologist Steve Ellis.

“There is potentially a greater risk because there were a lot of sparse crops from last season, so there was bare soil for them to lay their eggs,” says Dr Ellis.

Crops sown from November onwards which are thin and have few tillers will be most vulnerable, and a seed treatment offers one of the best control, he advises.

“I think crops that are sown late in September and into October have got a healthy enough tiller population by the time it comes to egg hatch so they are not likely to be susceptible to wheat bulb fly,” he says.

Dr Ellis adds it should be a low risk year due to low numbers coming through from the previous season, but a lot depends on how many eggs were laid in patchy crops.

“We will have a better idea at the end of the month when the HGCA field survey reports the wheat bulb fly populations found in Cambridgeshire and Yorkshire,” he says.