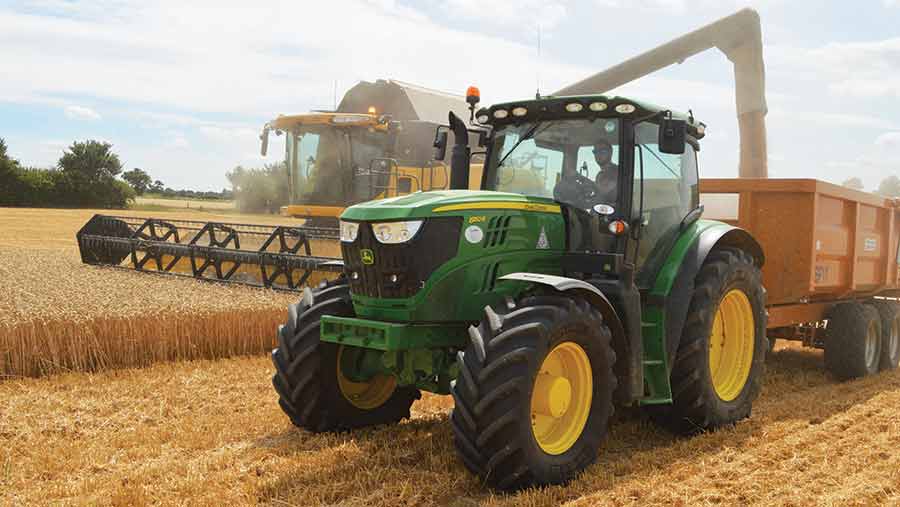 Cropping choices can be tricky in any season, but when cereal and rapeseed prices are on the floor it makes the decision even more difficult.

Experts argue that with the neonicotinoid seed dressing ban for oilseed rape and resistant blackgrass to consider, the final decision will not all be about gross margin when choosing combinable crops.

Charlie Whitmarsh, inputs director at distributor Frontier, suggests that many growers are looking so closely at the economics that they may overlook the need for long-term rotation planning.

“It is very easy to focus on the short-term economics and miss out on long-term sustainable rotations to deal with the challenges around grassweeds,” he says.

Graham Redman, partner at the Andersons Centre and author of the John Nix Pocketbook, agrees that the first issues should be rotation and weed control, especially blackgrass.

“There are issues with the chemical solutions to weed problems so drilling dates and rotation should be looked at seriously. Failing to plan with these issues in mind means you can expect to see a future loss of yield,” he adds.

With only provisional figures available, feed winter wheat is coming out on top of the gross margins table at £658/ha for harvest 2016, shortly followed by milling winter wheat at £638/ha then spring malting barley at £524/ha.

Although there are plenty of feed wheat varieties to choose from, one option could be to go for a high-yielding milling wheat such as Skyfall, says David Watson, partner at Bidwells.

“However, you might prefer more disease-resistant Group 4 varieties, such as Revelation,” he adds.

Frontier’s Mr Whitmarsh says the Group 2 wheat variety Lili gives good grain quality and high yields, with good disease resistance. It is a big step forward from Cordiale, but is not as early to harvest.

“Keeping blackgrass in mind, a good option for later drilling could be the feed variety Belepi, which has done well so far, and is fast to grow with a thick canopy. It has excellent spring tillering and can help to smother blackgrass but it is not one for early drilling,” he says.

Spring malting barley is also worth considering as the amount grown has been increasing over the past few years for domestic use and export markets.

Being spring-sown, the crop can be relatively cheap to grow and helps in the battle against blackgrass.

“In terms of conventional barley varieties, Glacier, Cassia and Tower are all high yielding with good grain quality. They can be pushed hard but do require good management,” he says.

New hybrid winter barley varieties Bazooka and Belfry, which are on the AHDB candidate list, offer a 2% yield improvement over Volume and have better disease scores.

“I think these two definitely have a place in the winter barley market this year,” adds Mr Whitmarsh.

In terms of break crops, winter oilseed rape is expected to return the best gross margin, at an estimated £522/ha.

“You must be aware of the challenges faced without insecticide seed treatments, but rapeseed offers an opportunity to target blackgrass and should definitely feature in drilling this autumn,” he says.

Bidwell’s Mr Watson agrees that there is still merit for oilseed rape in some rotations.

“It’s worth looking at widening the rotation to three or four years and even longer if it will fit in. I would also advocate the hybrid varieties as, drilled early, they get up and away fast. It can be a better option than drilling higher-yielding varieties and expecting them to fail,” he says.

See also: What farmers need to know before planting in the East

Clearfield varieties are another option as they allow a true post-emergence broad spectrum application, which has been successful in tackling broadleaved weeds and has shown good activity on grassweeds.

More interest in varieties with Holl

“On the AHDB Recommended List, Picto is a good option. Elgar and Nikita on the candidate list have good disease resistance, with Elgar being early to harvest,” he says.

“With Holl, it is all about securing buyback contracts, so ask merchants what is available. There is not a large volume at the moment but it is something to look at for the future,” he says.

Bidwells’ Mr Watson believes cabbage stem flea beetle damage in the autumn of 2014 will have put a lot of growers off oilseed rape. “Many are going to be reluctant to return to oilseed rape this year and should maybe look at growing peas or beans instead,” he says.

In 2015, marrowfat peas raced to the top of the John Nix Pocketbook forecast gross margin table, with blue peas, winter beans and spring beans not far behind.

However, this year’s margins have fallen back considerably, demonstrating the volatility of the markets. Despite this, pulses offer good agronomic benefits such as nitrogen fixing, as well as complying with greening rules.

According to Frontier’s Mr Whitmarsh, Wizard looks like it will continue to take the lion’s share of the winter bean market.

“Similar to Wizard, Tundra is one to look at for 2016 as it offers a higher yield than Wizard, although there is limited seed availability this year,” he says.

Winter oats is another option, and the declining areas planted in recent years mean it could have a good economic future, says Mr Whitmarsh.

“This year Mascani looks like it will take the biggest share of the market. Another one to look out for is Victorious, which has shown an 8% yield advantage, good continuity and quality, with good bushel weight and disease resistance,” he says.

Forage could alsp be an option

A further option could be to look at planting forage this autumn, says Andersons’ Mr Redman.

“Take a look at gross margins and see if there is someone to buy the crop, as it could really help to lift profitability. It is a case of seeing if there is anything you can do to meet the needs of local processors and in turn make a profit,” he says.

“Also, look at overheads as it might be worthwhile leaving ground fallow when you consider that you won’t have to combine. Assess how much could be saved on labour, fuel and general wear and tear on machinery,” he adds.

On the upside, fertiliser prices are low, so stocking up might be a good choice for the season ahead.

“In a year when grain prices are low it is worth being aware that you could be drilling seeds at a loss,” says Mr Redman.

“Do a budget and work out what would happen if the price were to move £10/t either way – all figures at the moment are estimates, and in such a volatile market it’s important to build in such sensitivity tests,” he says.