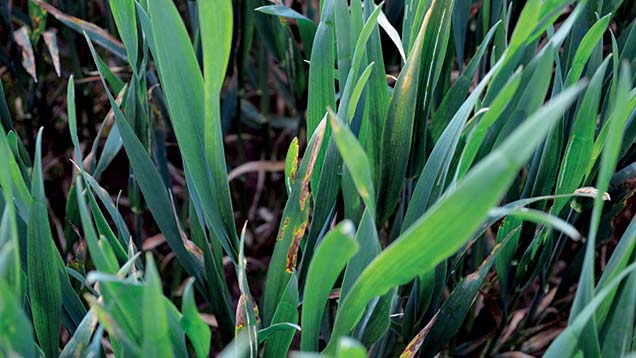 Wheat growers are being alerted to a disease threat in their crops and the need for a key fungicide spray later this month following recent rain.

Many have saved money on early season sprays due to the late dry spring, but experts warn the upcoming T2 flag leaf spray is critical.

Yellow rust is being seen in the east of the country, while wheat growers’ worst disease fear, septoria, is a widespread latent threat in this wet weather.

“This is not a year to skimp on the flag leaf spray and growers can not afford to get it wrong,” Bill Clark, commercial technical director of crop consultants Niab, tells Farmers Weekly.

See also: Wheat disease control needs to be spot on this spring

For most growers this T2 spray will need to be an SDHI/azole-based approach rather than just rely on an azole to give good disease control.

An earlier well-timed T1 spray should have protected leaf 3, but an unprotected leaf 2 will have been out for 10-14 days with the flag leaf emerging in most crops, he says.

In the high disease season of 2014, Mr Clark says a 4t/ha yield response was recorded by using an SDHI-azole-based spray compared with a simple azole-based treatment.

Some early winter wheat crop in south-west England have reached the flag leaf spray stage, while most further east are seeing the flag leaf slowly emerging.

Jonathan Blake, fungicide expert at crop scientist group Adas, says wheat crops need to be kept clean and green for another 10 weeks until near the start of harvest.

The change to wetter weather over the last two to three weeks means there will be plenty of disease in crops, although it may well be hidden from the eye.

“The recent weather has strengthened the case for robust rates and using the best products. Very few crops will not have disease. It’s there and it will be spreading,” he says.

Mr Blake says there is likely to be latent infection on leaf 2 and leaf 3, and there will be a need for curative action at the T2 spray timing.

The T2 flag leaf is the most important in terms of yield response and for most growers this will mean that an SDHI-azole approach will be essential, he adds.

Christine Lilly, technical manager at distributors Frontier and based in Lincolnshire, says there is a lot of septoria around in the group’s untreated fungicide trial plots.

She also points out that yellow rust is coming back in some crops as in the group’s trials 20 out of 35 varieties have signs of the disease.

She advised the use of an SDHI-azole product due to disease pressure and as the gap between T1 and T2 is being stretched to 3-1/2 week plus.

“If grower have cut rates at T1, then they should definitely not be cutting rates at T2,” she says.