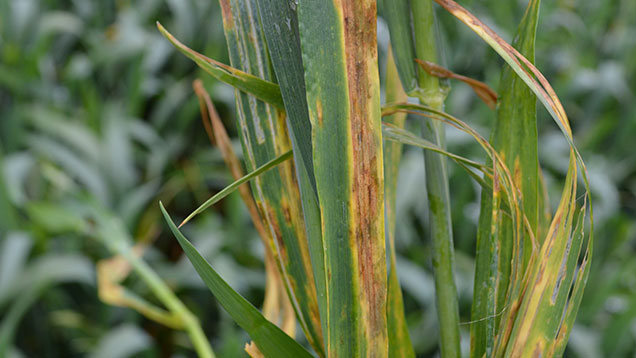 Wheat’s most yield-sapping disease septoria is being seen from Scotland to southern England across all varieties, highlighting that it may be tough to control this season.

Early drilling and a mild autumn has seen the disease take a firm hold of winter wheat trial crops from East Lothian down to Essex, more so than yellow and brown rust.

See also: Cereal disease threat may be worse than in ‘horrific’ 2014

In the two early-drilled trials by agronomy and distribution group Agrii, all 50-plus winter wheat varieties showed clear signs of septoria when assessed in late January, even the more resistant varieties.

“Septoria is a given and growers should aim their fungicides at the disease, so timing sprays will be key,” Colin Lloyd, head of agronomy at Agrii, tells Farmers Weekly.

He adds that septoria is the most serious disease threat to winter wheat, while yellow rust can be more easily controlled and brown rust needs to be monitored as it can sneak into crops late.

Feed wheat Diego is still the most popular variety with a share of the commercial seed market of 17.2% while Skyfall (7%), Crusoe and Evolution (both 6.7%) were the next best sellers.

Will Foss, regional technical adviser at Agrii, believes growers in his Eastern England area are now picking varieties more on their septoria resistance like those growers in the West who generally suffer more from the wet-weather-loving disease.

“The winter has been mild until the past two to three weeks so the risk of disease is still relatively high for the coming season,” he says.

In the Essex trial covering 55 winter wheat varieties at Tiptree, between Chelmsford and Colchester, drilled on September 9, all varieties showed septoria, 47 saw brown rust and only 10 yellow rust.

Meanwhile, at the Scottish site with 77 varieties at Drem, 12 miles east of Edinburgh, drilled on September 30, all showed septoria, 33 saw mildew, 18 yellow rust and none brown rust.