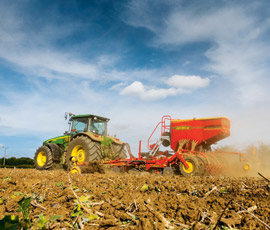 The wheat area is set to bounce back to about 2m ha after 2012’s disastrously wet autumn and could hit a new high if the weather allows.

“Conditions could not have been better and we are likely to be back to more normal levels of autumn plantings for cereals,” said David Leaper, arable technical manager at co-operative Openfield.

Dry soil has allowed sub-soiling before drilling to get land back into good condition after some of last season’s autumn crops were muddled in and did not survive the winter.

“Drilling is being conducted in near ideal conditions, so we should see the area back to normal or slightly above normal levels of 2m ha,” says Jonathan Lane, trading manager at Gleadell.

The HGCA reported 30-40% of the planned wheat drilling was completed in September as many did not want to be caught out by wet weather as last year.

“Many growers have looked back to which varieties did well in the difficult harvest of 2012 and stood by them,” says Openfield’s Mr Leaper.

As many opt for barnfilling feed varieties or quality milling wheats, there is a continued squeeze on biscuit-making wheats such as Claire, Scout and Invicta.

Of the new big yielders, Revelation has sold well as an early drilling wheat, Leeds looks attractive while Kielder has done well despite concerns about a low specific weight, Mr Leapers says.

Among the breadmakers, Crusoe has taken share from the older Solstice, while Gallant and Cordiale have held their positions.

Barry Barker, national arable seeds product manager at distributor Agrii, expects wheat drilling to continue into October, November and December, and says it may gain from the 15% fall in oilseed rape autumn plantings.

“It’s difficult to see why people will not continue to drill winter wheat until late into the season,” he says, adding that Diego, Santiago, Relay, Crusoe and Kielder are set to be the top five varieties.

Drilling is also progressing well in Scotland in near perfect conditions, and in a local market dominated by soft feed wheats grown for the distilling industry, Viscount and Istabraq are still firm favourites, with Leeds looking promising.

“Leeds is the most interesting of the new ones – it has the highest yield, high specific weight and reasonable disease resistance, apart from mildew,” says David Waite, northern seeds manager at distributor Frontier.