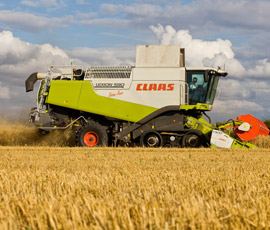 Scientists have unlocked key components of the genetic code of bread wheat, which they believe could help contribute towards global food security.

Researchers said the achievement was a “major breakthrough” which could lead to breeding wheat varieties with higher yields.

The results of the study could also be used to breed wheat varieties with enhanced nutritional value that are better able to cope with disease, drought and other stresses that cause crop losses.

Yields of wheat, considered to be one of the most important staples, have stagnated in Europe in recent years, whereas other crops such as oilseed rape, sugar beet and maize, are increasing.

However, scientists said the identification of around 96,000 wheat genes, and insights into the links between them, laid strong foundations for accelerating wheat improvement through advanced molecular breeding and genetic engineering.

Project leader Neil Hall, from the University of Liverpool, said: “We’ve identified about 96,000 genes and placed them in an approximate order.

“This has made a strong foundation for both further refinement of the genome and for identifying useful genetic variation in genes that scientists and breeders can use for crop improvement.”

Wheat has a global output of over 680mt and bread wheat (Triticum aestivum) provides over a fifth of the calories that we consume.

As the global population and the demand for wheat rises, major efforts are under way to improve productivity by producing varieties that can withstand adverse weather and disease, and that provide greater yields.

However, until now the very large size and complexity of the genome have been significant barriers to crop improvement.

Mike Bevan, director of the John Innes Centre, took part in the research, which involved scientists in the UK, Germany and USA.

“This enables breeders and researchers to generate huge numbers of genetic markers to identify regions of the wheat genome carrying useful traits. This is one of the key practical uses of the genome resources we created,” he said.