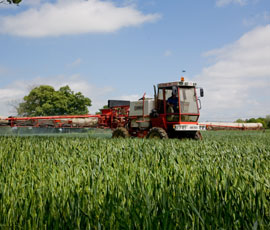 Wheat growers are being advised to consider foliar top-ups of magnesium this spring to coincide with peak demand and maximise potential yields.

Around 60% of all cereal tissue analyses received by Headland in late March and April tested low to deficient in magnesium, according to the firm’s Charlie Bannister.

“Growers should be aware of the potential risk of magnesium deficiency and should take precautions to sort the problem out before it arrives.”

The primary route for applying magnesium is through the soil with kieserite, he explains. “We are never going to supply enough to satisfy the plant through the leaf only.”

But in some circumstances, due to the variability in supply from the soil, uptake can be compromised. High levels of potassium and calcium can negatively impact magnesium availability, as can soils with pH outside 6.5-8.8. Sandy soils with low cation exchange ability have a low magnesium supplying power.

This means foliar applications of magnesium at T1 and T2 which supply the crop during rapid growth. Product choice is important and formulation key to making sure the element is available to the plant with the nitrate form having been shown to be more useful to the plant, he says.

Magnesium is responsible for many essential functions. It plays a key role in photosynthesis, being the central atom in chlorophyll. If you compromise that then the whole process breaks down, he stresses.

Yet magnesium has another very important role in carbohydrate transport within the plant, which if not available at the right time can limit yield, according to Jerry McHoul of K +S UK & Eire. He reports significant yield improvements of 0.2-0.25t/ha from foliar applications of Bittersalz coinciding with peak demand from the crop or when not enough magnesium is in the soil.

These long-term average yield increases are associated with a rise in thousand grain weight from 38 to 48g, highlighting the role magnesium has is transporting photoassimilates to the grain, he explains.

“The flag leaf is the machine producing sugars that all need exporting to the grain and if there is not enough magnesium grain fill can be reduced and so can yield as well.”

Magnesium off-take for a cereal crop is about 25-40kg/ha with the crop starting to take it up in earnest about mid to late April. “We get better responses with split timing at T1, T2 and a smaller application at T3. But if growers are only making one application then the flag leaf is the most important one.”

The use of magnesium shouldn’t be restricted to milling wheats, according to MrMcHoul. Although magnesium and sulphur (the other component of Bittersalz) have strong interactions with nitrogen and allow the crop to better utilise nitrogen, there is no evidence from the UK to suggest that magnesium has any direct increase in protein levels. Therefore, McHoul recommends 20-30kg/ha of Bittersalz on both milling and feed wheats. And it more than pays for itself, costing less than £5/ha, he adds.

However, the foliar route isn’t always justified, according to Independent agronomist Steve Cook who believes if soils are routinely sampled and indices maintained foliar sprays are not required. “Magnesium needs to be there for the whole life of the crop. The only magnesium we apply is kieserite on a rotational basis. If soils are deficient they would need more magnesium than would be able to be applied in a foliar form.”

Many of Mr Cook’s farms in southern England are ex-dairy farms where indices are generally high. Many of his growers use Fibrophos as a source of P and K which also delivers magnesium and some growers use sewage sludge.

Protein is very important for Mr Cook’s growers and he believes that the sulphur in the kieserite is helping his growers achieve high levels of milling wheat at good success rates. However, he doesn’t rule out a foliar top-up completely.

“If there is a transient deficiency on plants, as there could be this year on waterlogged soils, there may be a case for applying a foliar application.” He also watches out for chalk soils and land where there has been no livestock for decades. In these cases, if justified, Mr Cook would select a product with as high percentage of magnesium as possible such as MagFlo from Yara which contains 50% magnesium oxide.