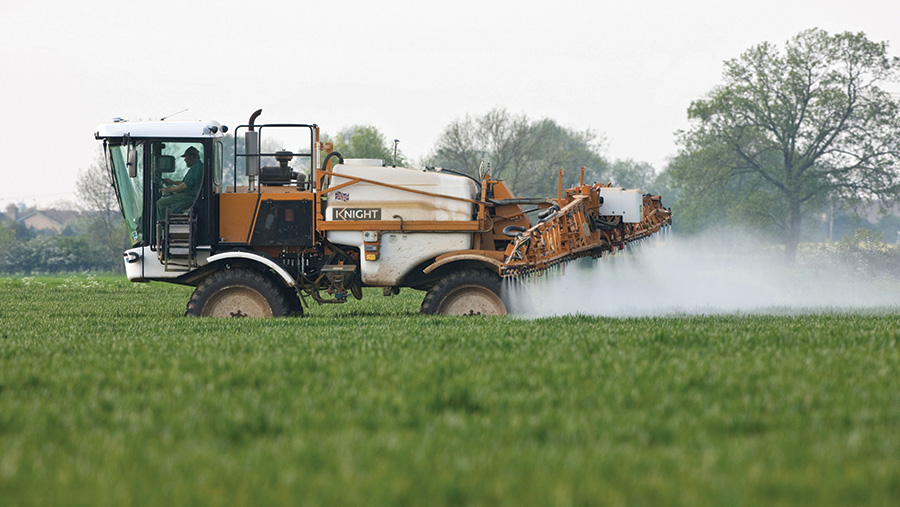 Spend or save? That’s the debate taking place in farm offices up and down the country, as fungicide strategies are being discussed.

And it’s not an easy question to answer.

On the one hand, disease pressure is mounting, with almost all of the pathogens that can infect wheat already being found in crops, having been virtually unscathed by the mild winter.

On the other, grain prices are at their lowest for a few years, falling to close to £100/t as Crops went to press (29 February).

With such little end product value on offer, growers are reluctant to commit to huge spray bills when they may not get a return.

A perfect storm, believe some agronomists and researchers, who warn that there’s potential for things to all go wrong very quickly.

Their advice to growers intent on cutting costs is to make sure that they don’t end up just cutting corners – and letting disease take hold.

As a result, most are advocating fungicide programmes costing about £120/ha, making maximum use of all the chemistry available and with attention being paid to tight spray intervals.

But they also acknowledge the individual grower’s attitude to risk will have a bearing on final spray recommendations.

So, with the new season approaching rapidly, what’s the right approach?

Should programmes be heavily front loaded with the guard maintained all season, regardless of the cost, or is there any room for manoeuvre?

And if there is some scope, does that come by reducing the number of applications, or simply by tweaking fungicide rates?

Before those questions can be answered, two developments concerning the diseases that most cereal growers will be aiming to control this spring have recently been announced – adding to the decision-making process.

Although it’s too soon to say how they will affect crops or if any specific action needs to be taken immediately, both could have implications on the success of this year’s programmes and the future spread of resistance to fungicides.

The first of these, news of which came from the UK Cereal Pathogen Virulence Survey towards the end of February, is the detection of a new race of yellow rust in the UK.

Known as the Kranich yellow rust race, it originated from Denmark and Sweden, and is the first new one to be detected since the virulent Warrior race was found back in 2011. Identified from an isolate collected in 2014, it was tested in the field in 2015, on recommended and candidate wheat varieties.

As Sarah Holdgate of Niab explains, it is too early to predict how the Kranich race will establish in the UK and what effect it will have on crops.

“The most important thing at this stage is for growers to be vigilant, so that we can monitor what is happening in the field.

“As it is a new race, the resistance ratings on the latest Recommended List may not hold up.”

And that appears to be the case for two newly recommended varieties, Spyder and Graham, both of which have 8s for yellow rust, but would seem to be slightly sensitive to this race.

As a result, Dr Holdgate and her team are interested in receiving samples from infected varieties that are rated as resistant to the disease, so further guidance and advice can be issued.

Of far greater concern, however, is the recent blow that a new mutation in UK septoria populations has been found at a field site in southern England.

The mutation, which could have implications for SDHI efficacy, is the same as that found in Ireland towards the end of 2015.

AHDB-funded monitoring work being done at Rothamsted Research by Bart Fraaije found two isolates with medium to high resistance to the SDHIs, which were subsequently confirmed as having the C-H152R mutation.

This mutation allows isolates to survive up to 100 times the concentration of SDHIs – giving it more potential to spread in field populations and affect the performance of this important chemistry.

Fortunately, the frequency of the isolate was very low at the site it was discovered, reports Dr Fraaije.

“We don’t know what the full implications of this discovery are going to be, but it’s not going to affect fungicide efficacy in 2016.

“However, it is a very timely warning of the threat of fungicide resistance and the need for best resistance management practice.”

A look back at the past few growing years for guidance doesn’t make fungicide decisions any easier.

In 2014 – a very high disease pressure season – responses to fungicides were huge, with treatments paying for themselves many times over. If ever you needed persuading that fungicides were worth every penny, the proof was there.

However, in 2013 and 2015, when there were much lower levels of disease, some of the responses achieved barely covered the cost of the fungicides.

According to disease specialist Jonathan Blake of Adas, there may be some opportunities for fungicide savings in 2016, especially where resistant varieties are being grown and later drilling took place, although he sounds a note of caution when it comes to the rusts and where disease pressure is very high.

“To date, the mild winter has suited the rusts, with both yellow and brown rust being reported in crops already.

“There’s no need to panic, but the disease may need to be taken into account when deciding on the early season sprays.”

That’s because brown rust, in particular, cycles more efficiently and gets into plants quicker in warmer temperatures, he explains.

“Winter temperatures have been about 4C higher than average, so adding a rust-active component in with the chlorothalonil-based T0 spray could be a sensible precaution.”

With fungicide stewardship and selection pressure in mind, that needn’t be a triazole, he points out.

“There are other choices, such as a strobilurin, which can be used for this purpose. Then you can keep the triazoles back for other timings.”

Resistant varieties have a role in protecting chemistry and may allow more than just some leeway with spray timings, he believes.

“We know that established varieties such as Skyfall and Revelation have been cleaner and given some reprieve with inputs, but we are now seeing the next step forward with varieties.”

He picks out seven wheat varieties which have joined the Recommended List in the past two years – breadmaking types Illustrious and Siskin, biscuit wheat Spyder and feed types Silverstone, Costello, Graham and Belgrade – as potential choices for a lower spend.

“Over the past five years, these varieties have given an average response to fungicides of 1.06t/ha,” he points out.

“That’s very different to the response that you will see from the most susceptible varieties, which has been in excess of 3t/ha.”

Treating these varieties with exactly the same fungicide regime as susceptible types shouldn’t be necessary, especially in the drier east of the country, he adds.

“In the West, where disease pressure can be massive, you’re more likely to see bigger responses to fungicides. So the season and the situation, as well as the variety, should be considered.”

For most, the starting point for fungicide programmes is septoria – as that is the one battle that you don’t want to lose, says Andy Bailey of Adama Agricultural Solutions.

“Given the current situation in the field, the message to growers has to be to take control early on,” he advises. “It has been said before, but prevention is better than cure.”

In fact, only prevention is possible in most situations, he points out.

“We have lost much of the curative control that the triazoles used to offer. They are still very important fungicides, but we need to use them in the right way to get the best out of them.”

As a result, greater emphasis should be given to earlier spray timings, so that leaves are protected as they emerge.

“Where curative activity is required, at T2 for example, you must maximise the amount of triazole that you put on with the SDHI.”

Multi-sites are an essential component of any programme, both for their ability to protect other chemistry and for their disease control properties, he stresses.

“They should always be included in T0 and T1 sprays, with the decision made about T2 nearer the time. Folpet, in particular, can be used to stop the selection of resistant strains and will modify selection pressure.”

Getting it right from the start is the key to managing septoria, agrees Ben Giles of Bayer CropScience.

“If you don’t let it in, the season is much easier to manage,” he says.

His advice on septoria is to use the minimum rate of an effective dose of SDHI at T1 and T2, supplementing it with as much triazole as you can afford and including a multi-site protectant with the early sprays.

“At T0, base the spray on chlorothalonil, adding a rust active if necessary,” says Mr Giles.

“Avoid the use of a primary azole at this stage, to save them for later, and don’t apply the T0 more than four weeks ahead of the T1.”

At T1, there are options, including going without an SDHI, he believes.

“If you’ve got a late-drilled, resistant variety, you could go for a triazole plus some chlorothalonil. But think about whether you are going to put pressure on your T2, as well as your resistance management.

“And the yield potential of the site is relevant too.”

The T2 timing is the obvious place for an SDHI, such as Aviator, he remarks.

“Whichever product you choose, the key consideration is to make sure it has enough triazole in with it.”

The performance of BASF’s Librax (fluxapyroxad + metconazole) has been better than expected for the past two years, giving it a strong position at T2, acknowledges AICC agronomist David Lines.

“When you look at the individual components of the product, there’s no obvious explanation for the results it has achieved,” he says.

“But we have seen this sort of thing before – Prosaro is another good example of a co-formulated product that does better than it should.”

Librax stood out in the very bad 2014 season, where treated plots were greener for longer, he recalls. “Where it gains over others is that it offers very rapid eradicant activity. It seems to get a great deal of the product into the plant very quickly.”

Librax offers practical advantages too, he notes. “It mixes well, is easy to wash out of the can and is more rainfast than Adexar. So the sprayer operators like it and they can add chlorothalonil to it.”

“We couldn’t really pick them apart – the slight differences in yield weren’t significant.”

Their place at T2 is clear, he believes.

“At T1, it may be less obvious. But where they are going to feature at T1, it makes sense to use one which offers stem-based disease control, such as Aviator or a Vertisan mix.”