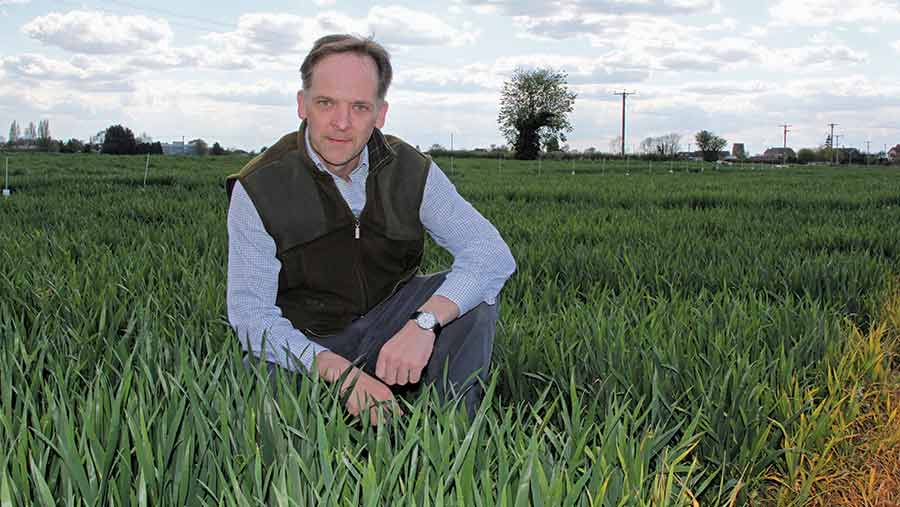 Wheat growers may be able to save money and help delay fungicide resistance by using just an azole early in the season and saving SDHIs for later.

If a wheat variety with good resistance to septoria is being grown then an azole with a multi-site like chlorothalonil at the T1 timing could give sufficient disease protection and save £7-£10/ha compared with an SDHI formulation.

Jonathan Blake, fungicide expert at crop consultants Adas, says at the T1 stage leaf 3 of the wheat plant has just emerged so needs protection rather than curative action.

“With a more resistant wheat variety, septoria will not have reached leaf 3 so protectant action will be the most important,” he tells Farmers Weekly.

At this T1 stage, usually in late April, leaf 3 should be either clean of disease or just recently infected so a well-timed azole and a multi-site spray might be sufficient.

However, if a more septoria-susceptible variety is being grown which has been sown early then a more robust fungicide spray will likely be needed.

“If the T1 spray gets delayed then the azole would be less effective and the extra power of the SDHI would be needed,” he says.

The leading azoles prothioconazole and epoxiconazole are the most effective against septoria and can be use with chlorothalonil for added protection.

He suggests that in a low disease year and if growers are convinced they will not be delayed then they could go with a three-quarter rate of prothioconazole (Proline) plus chlorothalonil and save on an SDHI.

“Timing is more critical for this approach at T1. However, if there was no T0 and the T1 is delayed then there is a greater need for an SDHI,” he says.