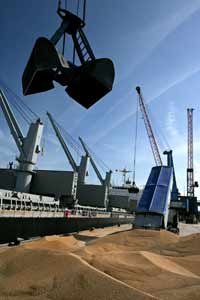 Speculative trading has often been cited as a factor in the volatile wheat markets, so a recent case in the US is unlikely to find much sympathy from farmers caught out by the wild market swings seen in 2008.

A former employee of one of the world’s biggest commodities brokerages has been charged with fraud, according to the Financial Times.

Evan Dooley worked in the Memphis office of MF Global during the period of record wheat prices and market volatility in 2008. He was reportedly indicted on Wednesday (28 April) on 16 counts of “wire fraud” where he placed short positions, or bets, that wheat prices would fall.

The FT said prosecutors accused Mr Dooley of engaging in overnight dealings on the Chicago Board of Trade in January and February 2008 that exceeded speculative limits, before being discovered by the company.

“Grain traders said at the time that the volatility was due, at least in part, to MF Global’s efforts to close the unauthorised positions taken by the trader in the wheat market,” the FT said.