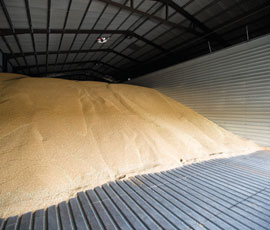 Grain prices continue firm despite harvest pressure as end users weigh up what quality they can use.

Prices have been less volatile over the past couple of weeks despite London November 2012 futures reaching a new contract high of £207/t last week and regaining that level as of Wednesday (19 September).

Reflecting the wide variation in availability and end-user preferences, spot prices varied from £189/t ex-farm in the East Midlands to £202/t ex-farm in Scotland on Wednesday.

A stronger euro has kept the UK competitive, although once current export commitments are met, availability could be very tight.

The Ensus bioethanol plant on Teesside is taking up to 3,000t of wheat a day and Vivergo’s Humberside plant is set to open in the final quarter of the year. At full capacity these will account for more than 2m tonnes of wheat, while compounder use is likely to be higher through the coming winter compared to last year.

Analyst and market adviser ODA puts the UK wheat crop at about 14m tonnes, and while there are still many uncertainties, thinks there is potential for the market to rise further.

“A lot of millers and bakers are still figuring out how much they can use – they might have to consume more than usual to make up for the lack of quality,” said analyst Leo Kameke.

Egypt has been buying large tonnages of wheat mainly from Russia, Ukraine and France but the availability of Russian wheat is expected to reduce shortly.

The UK’s late and poor quality harvest led to wheat imports of 135,917t in July after stocks had been run down to historically low levels at the end of the 2011-12 season. Exports from the UK in July were just 15,613t.

• The size of the US maize crop being reduced by 1.33m tonnes to 272.5m tonnes on lower yield estimates last week

Oilseed rape is a mixed market, with a slide in prices at the end of last week and early this week partly limited by fears over Canadian yield prospects. The stronger euro value makes UK rapeseed more competitive, while drilling is taking priority over selling for most growers.

Concern over the 2013 crop is also keeping things firm. In France and central Europe, lack of rain is holding back germination, which is supporting prices further.