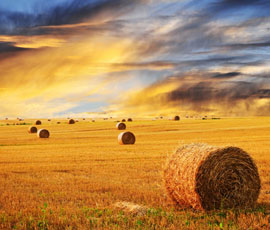 Weather continues to provide the main thrust for the rise in prices, with US crops suffering blasting heat and almost daily downgrades to estimates of the potential of Russian and Ukrainian crops and exports. Russia’s wheat exports may fall by a third this year to 14m tonnes against this season’s 21m tonnes, according to crop analysts Martell.

Estimates of US grain stocks last week were roughly in line with trade expectations. “We continue to see further upside price risk as the US drought persists and there were no strong bearish indications offered by the USDA acreage and grain stocks reports,” said Rabobank.

While the UK looks set for decent yields, disease worries have pushed the breadmaking premium back up to £20/t, following the wettest and dullest June since 1860.

European grain trade body Coceral has raised its estimates for soft wheat and oilseed rape crops in France, Germany and the UK. French soft wheat is put at 35.2m tonnes, up 1.1m tonnes and well ahead of the 2011 crop.

However cold winters in Bulgaria, Poland and Romania followed by spring drought has led Coceral to cut estimates for these countries to give an overall EU wheat crop of 125.7m tonnes, down 1m tonnes from its previous estimate and 3.8m tonnes on the 2011 harvest.