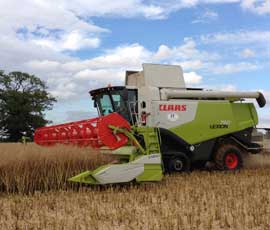 Winter wheat and oilseed rape are both ready to cut at Hall Farm, Fornham St Martin, Suffolk, meaning the Long family will have to hire another combine.

“We’ve been waiting for it to die off – and now the wheat has ripened at the same time.”

The Cabernet had yielded 5.3t/ha at 10% moisture, and Mr Long anticipated being on combining again later today.

“It’s looking more settled heading towards the weekend, so hopefully we’ll have a reasonable spell at it.”

The Xi19 and Solstice winter wheat was looking reasonable, despite a little bit of recent pigeon damage, he added.

“They were looking for moisture, so in a way the rain came just in time.”

With potatoes and onions to harvest as well, the family would be in for a busy few weeks to come, he said.