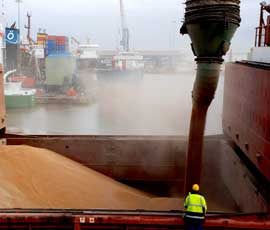 Higher forecast end of season wheat stocks around the world, coupled with other changes to US Department of Agriculture grain projections, sent grain prices way down again on Thursday.

Lower US exports and higher production in Argentina and Australia were the main contributors to the expected higher end of season stock figure. The market’s reaction to a change of just 4m tonnes, or 2.3%, in the end of season wheat stock figure illustrates very clearly how nervous it is. Stock forecasts for the other main grains were largely unchanged apart from rice, where end of season stocks are expected to be 5% higher than last month’s forecast.

“New crop prospects while still remaining favourable, are still open to weather scares/production issues, and these, if and when they happen, will encourage buying interest rather than selling,” said Gleadell in its market report today (Thursday).

“The commodity sell-off, mainly as a result of increased concerns over recent events in North Africa/Middle East and potential demand, coincided with better weather prospects for the US plains and reports that China’s drought situation was easing.”