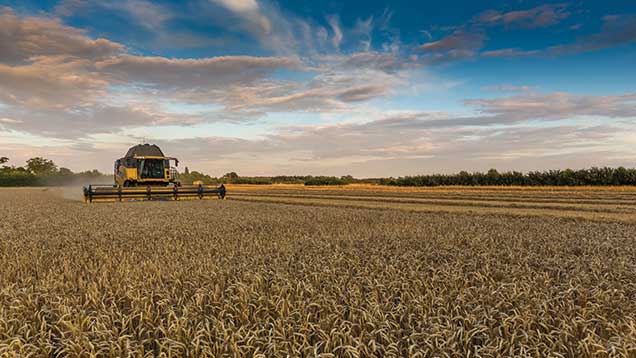 High yielding, milling wheats have grabbed the headlines in recent months with high milling premiums, but pushing for high yield at least cost with a feed variety remains the best option for some.

One seed trader sees a growing geographical split on variety choice, with barn busters supplying animal feed mills and bioethanol plants in the north while in the south and east there are opportunities for quality wheat exports.

David Waite, northern seeds manager at Frontier says one market driver in recent years of variety choice in the north, across Yorkshire and into the midlands, is for industrial use with three large consumers of wheat.

“There is the Ensus bioethanol plant on Teesside, which uses a mixture of cereal feedstocks, the Vivergo bioethanol plant in East Yorkshire and the Cerestar [Cargill] plant near Manchester producing starches.

When all three are running, there is demand for an extra 3m tonnes of wheat on top of the local animal feed market. Even without Ensus, it is still 2m tonnes extra.

Growers will be looking for good agronomics, disease resistance and high yield. Mr Waite believes older favourites like Grafton will remain popular, “as growers like the fact you can sell early and has good spec.”

“Top of the Recommended List Reflection is the new kid on the block being early maturing and with a good specific weight and stiff stem.”

“Opting for 4-5kg/hl more weight gives you a bit more tolerance if specific weights are being hit in a poor year,” he says.

Other Group 4 feed wheat favourites in the north include Santiago, JB Diego and to a lesser extent, Kielder.

Growing for export is an option, particularly in proximity to the deep water ports like Tilbury and Southampton.

“It is sensible to grow something that may secure an export premium. One such option is the KWS Group 2 variety Lili, which in the East at 105% is only 1% off the top spot.

“So the message for those in the southern and eastern counties is with Lili you get yield and some premium potential. That’s why I see Lili being popular in the south.”

He adds that Lili, Skyfall and Trinity complement each other offering a range of maturities (+2, 0 and +1, respectively).

“These newer Group 1 varieties have halved the yield penalty of going with quality rather than feed,” says Mr Waite.

Lili may also be an option for growers on chalk in the area west of a line from Salisbury south to Blandford Forum.

On chalk there are many good quality wheat growers with wheat historically destined for Southampton and some going to ABN’s Avonmouth port.

However, it is difficult on chalk to get up to the 13% protein for breadmaking, as chalk is inefficient and you still get yield responses even at 300kg/ha, diluting protein.

Therefore, if you can’t get hit the 13% protein specification, Lili offers the yield of Santiago but with a £5-10/t premium as a blending wheat. Typically you need a protein of 11.3-12% and a Hagberg of 180.

“This middle route offers a smaller premium, but without the cost of the extra bag of nitrogen and sprays to hit full milling spec and you are still getting feed wheat yields.”

Another variety is Group 3 Britannia, which has done well for us in the south west and is suitable for export. “It did well in our own trials and out yielded JB Diego and Santiago, so is not a slouch when it comes to yield.

“It has weaker straw, but on chalk, it is not being pushed as hard as on heavier, more fertile land so low risk of lodging.

West of Salisbury, growers are looking for the highest yield at least cost and Reflection looks attractive at 109% for the West region compared with JB Diego at 103%.

“That’s quite a difference and a lot of JB Diego is grown around here.”

Another variety that has done well in Pearce Seeds trials is Anapolis bred by Saaten Union.

“Although it didn’t make it onto the HGCA Recommended List, it did well in 10 trials coming top in the last two years. With a fusarium rating of 8, it is useful on mixed farms, as a lot of wheat follows maize here.”

It has a 6 for septoria and a good untreated yield (111% in Niab Tag trials).

“You need varieties that cope well in challenging conditions in the south west and they are not always picked up by the Recommended List trials, with their heavy disease control protocols.

Mr Taylor sees reflection being tried in the west, being earlier maturing. Other high yielders have not been taken up by growers, for example, Kielder is a bit late maturing and weaker on yellow rust.