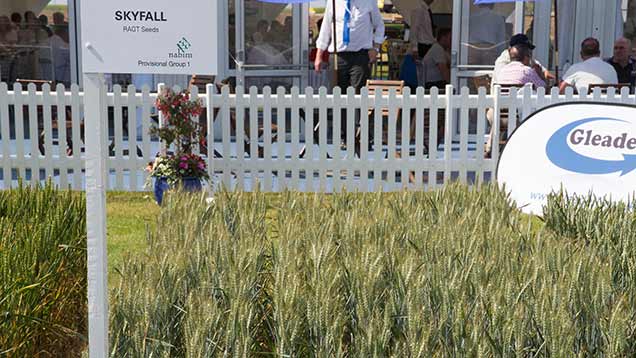 The variety – from breeder RAGT UK – received the green light from flour milling industry representative Nabim and is the first variety to come through its vigorous new testing process.

Since being added to the HGCA Recommended List in 2013 as a provisional Group 1 based on small-batch baking tests, Skyfall has received much interest from milling wheat growers across the UK.

The recent news of a full Nabim seal of approval now gives the whole chain confidence that its grain hits the mark at the mill for bread-making quality.

“A first year sell-out is very rare and it’s a feat that hasn’t been achieved since Group 3 wheat Claire in 1999, so as you can imagine the RAGT team is blown away by the market’s receptiveness,” adds Mr Howell.

In harvest 2014, Skyfall yielded 103% of control in Recommended List trials, 1% behind Santiago and on par with top-yielding feed wheat variety Kielder.

It has a solid all-round agronomic package, with a score of 6 for septoria, yellow rust, eyespot and mildew and 8 for brown rust and lodging.

Celia Bequain, RAGT’s wheat breeder, believes the appeal of Skyfall has been increased this year as it has the ability to provide growers with a milling premium at a time when forward prices for harvest 2015 are depressed.

“It also has the best specific weight of all the group 1 wheats, has orange wheat blossom midge resistance and the Pch1 eyespot resistance gene – a combination not available in any other wheat on the Recommended List,” she adds.

The Pch1 eyespot gene also has an association with higher protein contents crucial in making milling quality. Fusarium resistance has also been observed in trials in Europe where the disease is more prevalent.