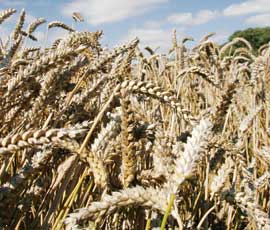 The British wheat yield record was broken this harvest by an enthusiast for feeding the crop little and often through the season. David Jones travels to the heart of Lincolnshire to find out some of his secrets.

Tim Lamyman crawled into the record book for his wheat harvest this year on his Lincolnshire Wolds farm when he could have sprinted.

He broke the British wheat yield record by the narrowest of margins while a small, ineligible field was close to being a world beater.

His record-breaking crop of Kielder winter wheat produced a yield of 14.31t/ha, beating the previous record by just 0.01t/ha, but the smaller field made 14.95t/ha.

The second field was slightly below the 8ha area stipulated for record breaking attempts, but showed the potential to push yield close to the world record of 15.64t/ha even on his light soils.

His secret is to feed the crop little and often and so keep the wheat growing as long as possible, illustrated by his late harvest this year during the first week of September.

He uses foliar fertilisers as many as seven times in a season, including two mixed with autumn sprays and four with spring fungicides to keep his crops green and growing.

“The yield comes from keeping the crop as green as possible and growing as long as possible,” Lamyman says.

But for a blocked seed drill and two patches of resistant blackgrass, his yield from the record-breaking field would have been 0.25t/ha higher.

He says the result was a “miracle” as it was produced on land with 375mm (15 inches) of red chalk wold loam over solid chalk with no subsoil, but it does give him a free draining but moisture retentive soil.

“In terms of water and light the season was nearly spot on,” he adds from his farm at Lamyman Worlaby Farms, Worlaby, about six miles south of Louth.

His sloping, free-draining land meant the crop was not standing in water in a very wet winter while the north-facing field did not suffer severely in the heat wave during June and July.

He points out that while south-facing fields show soil temperatures of 31C, his record-breaking north-sloping field was a cooler 26C during the hot spell.

The record crop followed oilseed rape and was drilled after minimum cultivation on 15 September, within his ideal window of 10-30 September for top-yielding crops.

The seed rate of 105kg/ha was on the low side but it was set to allow for vigorous tillering which he anticipated from the use of foliar fertilisers.

The crop established well with good root development before heavy rains in mid-October that were so severe they halted the lifting of potatoes on the farm.

He is convinced of the benefits of his two foliar fertiliser products from Bionature, consisting of a calcium/nitrogen mix called Delta and a 1-4-All trace element mix with nitrogen.

These foliar treatments increased root growth, giving a root mass of two to three times that of untreated crops, he says.

His autumn treatments for what he described as a typical blackgrass-infested field consisted of a pre-emergence herbicide mix, followed by a post-emergence insecticide to control BYDV plus Delta and 1-4-All.

This was then followed by a second blackgrass herbicide mix with the addition of Delta.

The crop survived the early winter in good order, but was hit by a -10C frost in January which prompted him to give it a Delta and 1-4-All treatment in mid-February.

The wheat colour returned but was again hit by a more severe -15C frost in March.

“Yet again it was back to a brown crop of wheat which looked as if I had just applied Roundup,” he says.

Into his first T0 fungicide spray in the first week of April went Delta and 1-4-All to feed the crop.

“After the T0 in April the crop never looked back, the key was the high number of tillers which produced a crop of 800 ears/sq metre at harvest,” he says.

He explains his type of land needs high head populations as he does not get the size of ears produced on his more fertile silty soils which produce around 550-650 ears/sq metre.

His four-spray fungicide regime includes foliar fertilisers in each tank mix, and he says his choice of fungicide was dictated by a focus on rust diseases rather than septoria.

High-yielding feed wheats like Kielder, and also Santiago, tends to have weak resistance to rusts and so this prompted his choice of the SDHI-triazole Seguris in his programme.

Applications of ammonium nitrate were dictated by his little and often approach with a four-way split focused on feeding the crop which included a flag leaf application like for breadwheats.

So was the foliar fertiliser worth it? Mr Lamyman costs the applications at £125-150/ha which at current grain prices would need an extra 1t/ha of wheat to cover costs.

Average farm feed wheat yields are 13.0t/ha compared with 10.4t/ha before he embarked down the foliar route, so for him the answer is clearly yes.

With Florentine winter barley yielding 11.5t/ha, some 6% off the world record, and Propino spring barley at 10.25t/ha, it is clearly a farm with high yields.

For this year he has decided to join the Yield Enhancement Network (YEN) yield competition run by crop consultants ADAS.

To push up yields further he will look at an additional foliar feed in mid-July to prolong green matter in the crop, and will try again with Kielder and the new feed variety Icebreaker.

But to beat the world record set by Mike Solari in New Zealand in 2010 with his 15.64t/ha crop, Mr Lamyman believes he may have to wait for the right year to beat the New Zealander who uses irrigation and twice as much nitrogen as British farmers are allowed.

“We could break the record, but it would only be a one-in-five year chance depending on the weather,” he says.

Mr Lamyman was assisted in his record-breaking crop by agronomist Simon Shaw, who works for Farmacy, which is an arm of adviser Hutchinsons, and also Mark Carter of Bionature. Hutchinsons is a corporate sponsor of ADAS’s Yield Enhancement Network (YEN), which is striving to close the gap between current yields and potential yields.

COST OF THE FOLIAR FERTILSER PROGRAMME