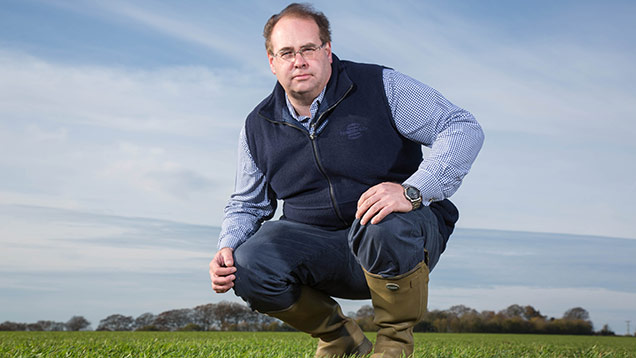 The British wheat yield record was broken this harvest for the second successive year by the same Lincolnshire grower. David Jones travels to the farm in question to find out how.

Feeding his wheat throughout the season in a little-and-often approach is key to Tim Lamyman’s success in growing the highest-ever-yielding wheat crop in Britain.

Foliar feeds applied through the autumn, spring and summer keep his bumper crops looking green, even and healthy to help resist diseases.

High in the Lincolnshire Wolds, this nutritional focus has seen his average wheat yield touch 13t/ha this summer across 120ha of the crop on not classic wheat land.

Mr Lamyman’s well-drained loams may not have the inherent fertility of deep silts or heavy boulder clays, but he is slowly narrowing the yield gap with the world record.

He believed his wheat was on course to achieve nearly 90% of its yield potential of 19t/ha, but late disease and a lack of late sunshine saw him record 14.5t/ha.

Mr Lamyman is convinced that foliar feeds which encourage the production of cytokinin plant hormores – used nine times in the season and largely applied with other sprays – produce healthier crops all the way to harvest.

This gives him a green and healthy wheat crop even on the variables soils on the hillsides at his 600ha farm at Worlaby, about six miles south of Louth.

“It is the consistency that gives you yield and the crop was very even from the autumn through to the combine,” he says.

Plant tissue testing every month in the growing season gives him a good idea of the needs of his crop, which he keeps growing into September to give him maximum yield.

“The two key factors for us are the attention we give to growing the crop and using a nutritional package to alleviate stress in the crop,” he adds.

His land rises to about 140m above sea level to one of the highest points in the Wolds, and he finds his best wheat land at 60-105m, which are free-draining and medium-bodied.

The field chosen to try to break the yield record and enter into Adas’ Yield Enhancement Network (YEN) competition was not his best land but a field that had given remarkably consistent yields.

Adas launched its YEN competition last year in an effort to break through the yield barrier facing growers with the hope it will drive innovation and encourage growers to get close to their maximum potential yield. For information about registering to enter next season’s competition, go to the Adas website

He was eager to see what the soil, which he describes as 20cm of chalky, sandy-clay loam over chalk, would produce under his nutritional programme.

The field was drilled on 14 September with the variety Kielder in the middle of his narrow window of 12-16 September for record yield attempts at a seed rate of 135kg/ha with the aim to produce 700 ears/sq m.

The early harvest of the preceding oilseed rape crop allowed time for two stale seed-beds for blackgrass control, and two autumn herbicides and two in the spring emphasised Mr Lamyman’s zero tolerance to this grassweed.

The foliar feeds were a mixture of Delta K, which gives a low dose of nitrogen and potash, and 1-4-All, which contains a range of minor elements such as manganese, magnesium, zinc, copper and iron.

No traditional phosphate or potash was applied in the autumn on the field, which had no manure applied for three years as the aim was to make the crop scavenge for nutrients.

The field looked green through the autumn, according to Mr Lamyman’s agronomist Simon Shaw, who works for Farmacy, which is an arm of the advisory and distribution group Hutchinsons.

“The crop had been fed through the autumn so stress levels were reduced and we saw a low level of disease,” Mr Shaw says.

Mr Lamyman was impressed by the tightly knit evenness of the crop in the spring, with so many tillers that it was difficult to pick out the main stem.

A full fungicide programme was used in what turned out to be a high-disease year and a five-spray regime, containing a late ear spray, cost £125-150/ha.

“The little-and-often nutrition approach produced healthier plants, which helped fight off disease and coped with plant stress,” he says.

An early foliar feed spray was applied in February and then each of the five fungicides sprays contained the foliar feed.

The total programme of nine sprays cost about £125/ha, although about £25/ha was clawed back by using a reduced seed rate, Mr Lamyman says.

Granular nitrogen fertiliser was applied in a four-way equal split with a small amount coming from the foliar feeds taking the full amount to 260 kg/ha.

High hopes of a really big crop were dashed due to sea frets and dull weather arriving in the second week of August and hanging around until harvest.

This caused septoria to come in late on the leaves and fusarium on the ears, and Mr Lamyman believes this caused the specific weight to be cut to 72.7kg/hl rather than an expected 76kg/hl.

He also believes his ear numbers at harvest of 650/sq m were below his target of 700/sq m, and so perhaps the seed rate was too low.

So were there any lessons for this season? Well, in hindsight Mr Lamyman believes the field may have been a little low on potash.

“We will probably look at additional potash applied at the flag-leaf stage through to ear emergence, and we are looking at new potash products,” he says.

On varieties, he will stick with Kielder but also try a new feed variety, Reflection, for the YEN competition this season, as he focuses on three main factors: yield, standing power and disease resistance.

Mr Lamyman’s system does not use heavy doses of plant growth regulators so he always looks for good standing power as he pushes yields higher.

He also looks for good disease resistance, especially mildew, which tends to be his number-one problem rather than septoria and yellow rust.

“Mildew tends to open the plant up, which allows septoria and yellow rust to attack,” he explains.