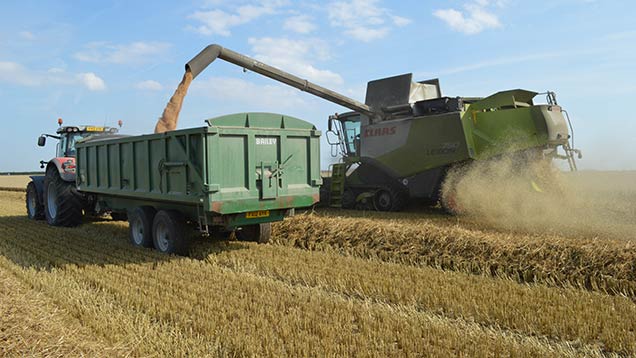 Lincolnshire Wolds grower Tim Lamyman has broken a second world record in a little over two weeks after harvesting the highest-yielding wheat crop ever recorded.

He beat the five-year-old New Zealand record by 5% with an astonishing yield of 16.5t/ha, which was a clear 2t/ha above Mr Lamyman’s current UK wheat yield achieved last summer.

Near ideal growing conditions culminated in the crop being harvested on Saturday (22 August) and adjudicators confirmed it had beaten Mike Solari’s 15.7t/ha achieved in New Zealand in 2010.

Watch a video produced by Bionature UK, which supplied the foliar feeds used in the growing of the record-breaking wheat crop.

Mr Lamyman had to wait until after 1pm for a sea fret to burn off from his farm high on the Wolds before starting harvesting, and Farmers Weekly was with him in the combine cab to witness the winning feat.

“It’s a fantastic credit to the whole team to get where we are now and achieve this record after five years of hard work,” he told Farmers Weekly.

He puts the success with the record-breaking crop down to three main factors.

“Everything fell into place for this wheat crop and I can not think what we could have done better,” he says.

Once the combining started the grain moisture dropped from 18% to 16%, and the yield readings from the combine cab were between 15t-17t/ha, even when cutting along tramlines.

Each load was taken to a weighbridge in a nearby village and adjusted to a standard 15% grain moisture before the final yield of 16.5t/ha was calculated.

The field was one of the most fertile on his 600ha predominantly arable farm at Worlaby, and at 140m above sea level is one of the highest spot on the Wolds with a soil depth of 300mm.

“We have good moisture-retentive soils, but without the nutrients of high-grade fertile silt soils, so we needed to feed the crop,” he says.

One of the key factor in the yield is the use of foliar feeds – three in the autumn and six in the spring – often combined with herbicide and fungicide sprays to keep the crop growing and never short of nutrients.

Agronomist Simon Shaw, from the Farmacy adviser arm of distributor Hutchinsons, says soil testing and tissue testing was carried out throughout the season.

“We tested what nutrients were in the soil, then worked out what the crop needed and gave it the right nutrition at the right time,” he says.

Patrick Salmon, director of Bionature UK, which supplied the foliar feeds, says these foliar feed nutrients are aimed at relieving plant stresses that can occur with conditions such as dry weather and frost.

“If we feed the crop little and often then it is better able to survive theses stresses,” he says.

The winter wheat crop had 330kg/ha of nitrogen fertiliser, a four-spray fungicide programme with plant growth regulators and a foliar feed programme costing about £150/ha.