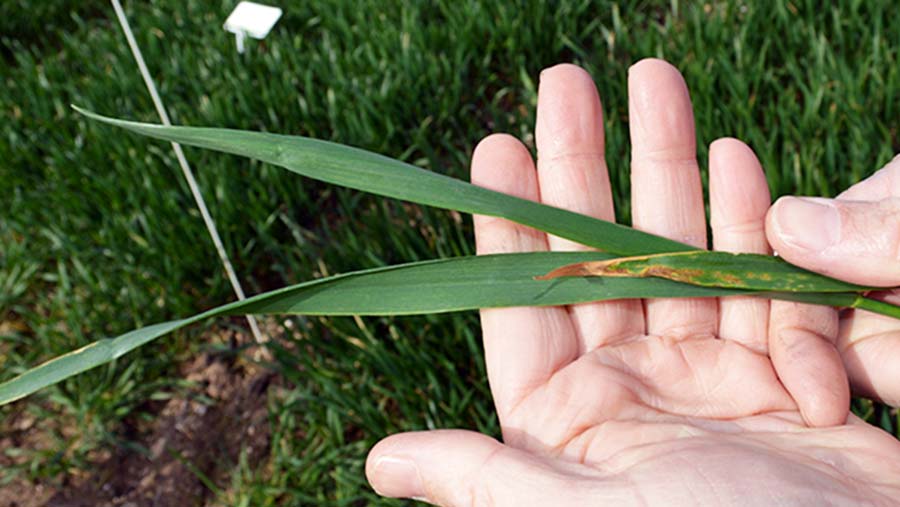 The countdown to critical T1 fungicide timings in wheat has begun with crops in the south of England likely to need a spray in the next week to 10 days, prompting some concerns about stretching gaps between treatments.

Agronomists are currently busy dissecting plants to determine when leaf three will be fully emerged, as growers ready the sprayers for a frantic whip around to guard against yield-sapping diseases.

Farming on the edge of Winchester, Hampshire grower Sam Burge tells Farmers Weekly that he thinks a T1 spray on his Siskin and Diego wheat is about 10 days off, with septoria the biggest concern for him.

He is confident that a robust T1 spray consisting of an SDHI, azole and protectant chlorothanonil will be an appropriate response to disease pressures seen in the crop.

Mr Burge’s agronomist, Richard Alderman, agrees, saying there is plenty of septoria inoculum lurking in wheat crops in the parts of Hampshire and Berkshire that he covers. 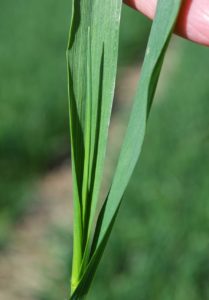 “Septoria is the main threat and there is a lot of inoculum out there. Periods of dry weather will help but we cannot rely on that. Yellow rust is also developing in less resistant varieties,” he says.

Mr Alderman sees a mixed picture when it comes to determining how far away a T1 fungicide is, with some varieties like Skyfall romping ahead, while others haven’t long received a T0 application.

“It is very variety and field specific. Some varieties could be dragged forward in terms of their T1, but that will mean a T1.5 is needed. The only way to know is to walk the field and count back the leaves,” he adds.

Fellow agronomist Nick Wall says leaf three is emerging earlier than he would like to see as it might stretch the gap between the T1 and the T2 flag leaf spray to beyond the optimum three weeks.

At a Syngenta trial site at Chilbolton Down farm, five miles north west of Winchester, septoria is being seen on the lower leaves of most wheat varieties with some signs of yellow rust on susceptible varieties.

With the T2 flag leaf stage usually reached about 15-20 May in this part of southern England, an early T1 spray could leave the T1-T2 gap at four weeks or longer, which leaves time for disease to strike. 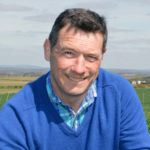 Much will depend on rainfall in April and May as septoria is spread largely by rain splash from the lower wheat leaves to the upper important yield building leaves.

Both Mr Alderman and Mr Wall are part of consultancy group Crop Management Partners and are a members of the Association of Independent Crop Consultants (AICC).

She says although conditions look fair for the coming week, if it does turn wet then septoria infection could surge.

“Growth stages vary significantly between varieties and drilling dates, so the only way to be sure on your farm is through checking those leaf layers. We are a good week away from leaf 3 being fully out and unfurled in late September drilled varieties,” she says.

Tristan Gibbs, a Kent-based agronomist who is also with Crop Management Partners, says a T1 spray on these crops of Skyfall and Siskin will go on this week.

No til Edgar looking great in the sun. T1 next week on a clean crop with the next N split. @Tim_Ashton_ pic.twitter.com/hbUot7Iukc

In the South West, Agrii agronomist Todd Jex has been busy dissecting plants to determine when T1 will be due. For this Skyfall, it could be in the next 10 days.

Independent agronomist David Lines says this crop of Skyfall in Herefordshire is looking fairly clean and will get a T1 in a week or so.

In winter barley, Somerset-based independent agronomist Richard Alcock says this crop of California is now at growth stage 31 and will need a T1 soon.