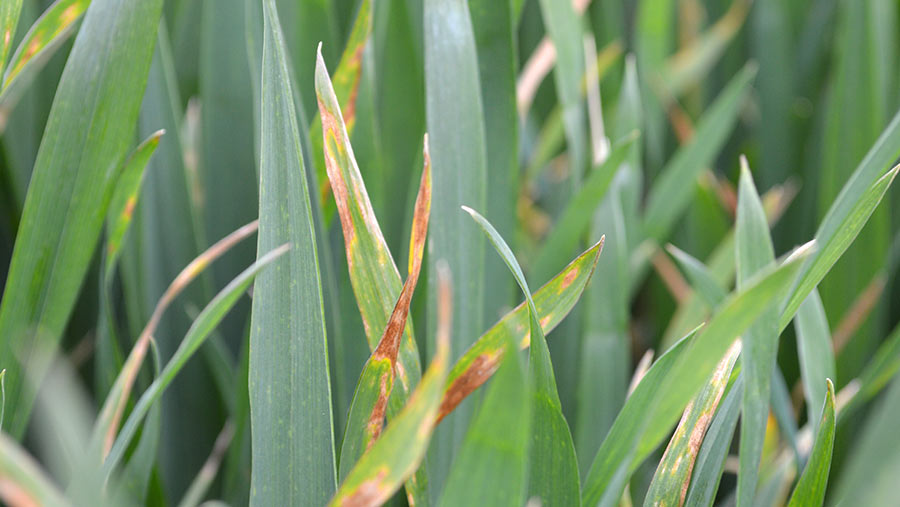 Scottish wheat growers are being urged not to gamble and cut back sharply on their T2 flag leaf fungicide sprays as disease is easily visible in many crops.

Dry spring weather has limited the spread of diseases but more rain in May has brought with it the threat of wet-loving disease septoria leaf blotch moving up crops.

Fiona Burnett, disease expert at Scotland’s Rural College, warns septoria can be seen on leaf four of most wheat plants, while yellow rust is creeping into some crops near the east coast.

“The dry weather has helped limit disease, but it is too big a gamble for growers to be cutting back too much on fungicides at T2,” she says.

Prof Burnett adds in low disease situation growers could reduce dose rates rather omit any of the elements of a T2 fungicide spray.

She suggests most stick with a SDHI-azole-chlorothalonil mix at T2, with the first two elements having a systemic action allowing them to flow through the green leaves while the latter protects leaves from infection.

Those growers threatened by yellow rust may need to add in a strobilurin or could look to switch azoles from that used in their earlier T1 spray to give the maximum level of disease control.

These T2 sprays, which are usually applied in Scotland in the last few days of May and into the first week of June, are key in keeping the crop free of disease for about three weeks until a T3 ear spray.